It is only Week 10 in the N.F.L., but it is not too early to think about the playoffs. Of course, there are the obvious teams that have virtually clinched postseason spots or virtually, well, not clinched them (ahem, the Jets).

Many teams in the middle are playing games that will be vital to determining if they are in or out. Some have positioned themselves well. Others are in a bigger hole than one might imagine.

Luckily, there’s a tool to quantify every team’s playoff chances, no matter the situation: The Upshot’s Playoff Simulator.

In addition to providing a team’s current chances of making the postseason or winning the division, the simulator lets you see how any combination of future results will affect those chances. And yes, it has been updated this year for the new, expanded 14-team playoffs.

The Chiefs (8-1) and Steelers (8-0) may not have mathematically made the playoffs, but simulating the season a few hundred thousand times reveals that each has more than a 99 percent chance to get there.

Although not unbeaten, the Chiefs are actually in a slightly better position than the Steelers: They could lose their next six games, and as long as they beat the Chargers in Week 17, they would still be more likely than not to make the playoffs. The Steelers are not in quite as strong a spot right now; they probably need to win two of their last eight games to get in. 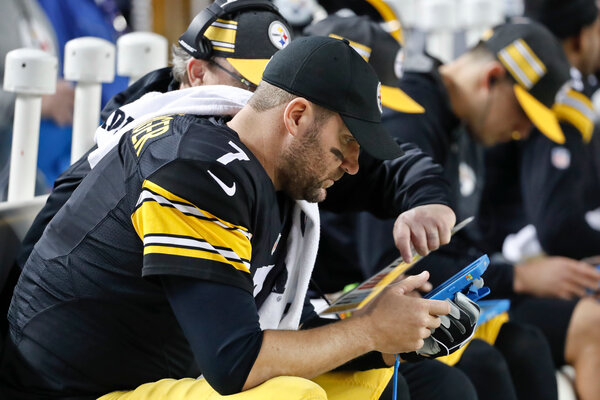 The Saints (6-2), Packers (6-2), Bills (7-2), Ravens (6-2) and Seahawks (6-2) are all at greater than 90 percent to get into the playoffs, the Simulator estimates. All those teams lead their divisions, except the Ravens. Baltimore is unlikely to run down the Steelers for the division title (it has a 22 percent chance to do so), but it is in a strong position for a wild card.

The Titans (6-2), who are just a game ahead of the Colts in the A.F.C. South, and the Buccaneers (6-3), who trail the Saints in the N.F.C. South, have a little more work to do, but both still have more than an 80 percent chance to get in.

While it might seem like the difference between 6-2 and 5-3 at this point in the season is marginal, it makes a huge difference in how likely a team is to make the playoffs. The next tier of teams, at 5-3 or 5-4, like the Dolphins, Browns, Colts, Raiders, Bears, Rams and Cardinals, may consider themselves in good shape. But they are truly on the bubble, roughly a coin flip to make the playoffs — or not — at this point.

A big reason is that a division title is slipping away from these teams and, without it, they may all end up hoping for a limited number of wild-card berths. The teams at 6-2 or so are better off: They can win their divisions or falter late and still slip in as wild cards.

For bubble teams like that, every game is important and may shift their odds significantly.

The Eagles are 3-4-1 but still have a 73 percent chance of making the playoffs, the Simulator predicts, better than seven teams with winning records. Why? Philadelphia plays in the woeful N.F.C. East, where the 2-6 Washington Football Team is in second place.

The Eagles could lose all five of their remaining out-of-division games, and as long as they go 3-0 against the N.F.C. East, they will probably make the playoffs at 6-9-1. Even a 2-1 record in those divisional games will give them a fighting chance at the playoffs — at 5-10-1.

The Jets are in even worse shape. Should they do the impossible and finish 7-0, their chance of getting in the playoffs would still be minuscule.

It is possible to construct a scenario, involving the Jets winning every game and just about every other wild-card contender — especially the Browns, the Colts and the Dolphins — collapsing, in which the Jets would sneak into the playoffs at 7-9. (Editor’s note: This is also not going to happen.)

And even as the season is only a little more than half over, quite a few other teams are also in serious peril of missing the playoffs: The chances for the Patriots, Cowboys, Giants, Lions, Broncos, Panthers, Bengals, Texans, Falcons and Chargers currently range from 9 percent to 2 percent to get in. In general, these teams probably need to finish 6-2 — at minimum — to get in.

Under the new 14-team playoff format, only the top seeds in each conference get a bye, so finishing first is more important than ever. Right now in the N.F.C., the Saints, the Packers and the Seahawks are in the mix for that spot, each at about 25 percent to win it. A handful of other teams — including the Buccaneers, the Cardinals and the Rams — still have a shot, although each would probably need to go 7-1 to finish first.

In the A.F.C., as one might expect, it’s a two-team race between the Steelers and the Chiefs.

Who’s going to win it all?

Though some teams are sure things to make the playoffs, the 14-team field this season and the vagaries of single elimination mean it’s far from clear who will wind up lifting the Vince Lombardi Trophy.

The Simulator doesn’t pretend to be better than Vegas oddsmakers, but using some of the same kind of data they do, it can provide estimates of teams’ chances of going far in the playoffs.

The Simulator currently favors the defending champion Chiefs, but gives them only a 17 percent chance: So despite Patrick Mahomes and an imposing lineup, they are still only 5-1 to win it all. Remember that when someone uses phrases like “sure thing” or “guarantee” when it comes to the Super Bowl.

The Steelers and the Saints are next, at 12 percent, with five more teams (the Ravens, Packers, Seahawks, Buccaneers and Bills) with a better than 5 percent chance. So even as some teams seem to have their fates sealed, there’s still a lot of uncertainty as to what lies ahead.

Except for the Jets.