Being a part of history was the only consolation for a disappointed Australian skateboarder Shane O’Neill, who failed to make the final in the first-ever Olympic event on Sunday.

O’Neill struggled to adapt to the heat and wind at the Ariake Urban Sports Park in a sport that is mostly staged in air-conditioned stadiums. His first run scored a low 4.66 points after he fell twice, and in his trick section he tried high-risk manoeuvres in a forlorn game of catch-ups. ‘It’s super hot and I really maybe didn’t choose the wisest tricks with this heat,’ he said later. ‘My board’s a little loose and I was trying a switch 360 double flip and I kept landing falling off.’

A former world champion in the sport, O’Neill was able to provide an explanation but no excuses for a poor start from which he never recovered.

‘This is the largest course we’ve ever had, which brings some physical difficulty, and we’ve never skated in this heat before, it’s really hot and windy, so new conditions,’ O’Neill said after being the first competitor eliminated from a contest in which he was among the favourites. ’Your board starts to get looser in the heat…. The rubbers in the middle of the trucks were melting, basically, which makes the board more wobbly and loose.

‘I’m happy to be here,’ said O’Neill, who hopes to qualify for Paris in 2024. The Olympics, he said, are ‘a different feeling, it’s super cool, I wish I could’ve done better and made the final and done the things I’d planned on doing.’

It was Brazil’s Gustavo Felipe who had the honour of being the first-ever Olympic skateboarder in the heat prior to O’Neill’s. France’s Vincent Milou got to be the first to fall over and sulk, before recovering to qualify for the final alongside his fellow Frenchman Aurelien Giraud, who scored top marks in the preliminary rounds. 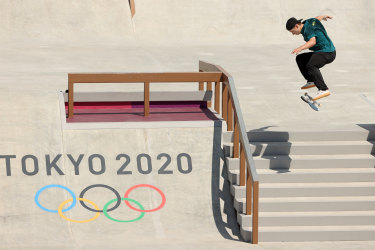 Australia’s Shane O’Neill failed to make the final of the skateboarding competition in Tokyo.Credit:Getty

The Ariake Urban Sports Park, a temporary venue, was loaded with the various handrails, banisters, staircases and other obstacles your mother would warn you to keep your skateboard away from – everything but fans. What organisers hoped would be an atmospheric youth-focused spectacle instead relied on piped music and an excitable American field announcer to generate noise.

The competitors donned a variety of outfits, from buttoned-up polo shirts to boiler suits to sleeveless vests to what appeared to be a chef’s uniform. The only mandatory dress requirements appeared to be that no outfit hug the body and that caps be worn backwards.

For all the informality of attire, the rules were rigid, with a 45-second limit for each run and a best-two-of-five format on tricks. This added a hectic pressure to what would appear otherwise to be a circle of friends fooling around and falling off their boards.

Competitive pressure or not, it was no fun for O’Neill, who separated himself from the field by taking off alone from the northern side of the course. But it was one of those days when nothing worked. ‘It was a little difficult out there for me,’ he said, ‘but I’m happy to be there. It’s all good.’

The event was won by Japan’s Yuto Horigome, the 22-year-old current street world champion, who remained composed in the conditions to nudge out Brazil’s Kelvin Hoefler.

Never miss a medal or great sporting moment with our Olympic update emailed daily. Sign up for our Sport newsletter here.