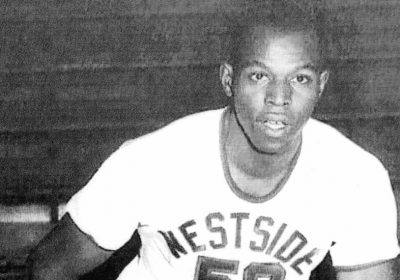 Memory fades, but simple tales we hear as children can drill so deep down into us we do not forget. It’s because of such a tale, short and sweet and told with some regularity by my late father as I grew up, that I will always hold tight to the memory of the basketball great Elgin Baylor, who died this week at 86.

“Did I ever tell you about the time I played Elgin Baylor?” my father would say as he looked into my eyes, filled with awe and wonder no matter how many times he’d begun this way.

“Elgin couldn’t score on me, no he couldn't. Not in that first half he couldn’t.”

There would be more to this parable, which my three older brothers also grew up hearing. It would turn into a lesson about humility and a meditation on witnessing greatness, but that start was how dad hooked me in the years not long after Baylor’s 1971 retirement from basketball, when the Lakers’ great was still widely known as a star. With that opener, and the account that followed, Baylor came to be one of the great pillars of my early imaginings.

This week, there will be many fond remembrances told about Baylor. Most will focus mainly on his All-Star years in the N.B.A. This is as it should be for a player who helped revolutionize basketball with his high-flying athleticism and all-around skill. Baylor’s decade of dominance in the 1960s foreshadowed Julius Erving, Michael Jordan and the dazzling, acrobatic game we love today.

Less attention will be given to Baylor’s unusual college years in the 1950s, spent far from well-known training grounds like Kansas, North Carolina or U.C.L.A.

Raised in Washington D.C., Baylor was overlooked by the major powers during an era when segregation was rampant in basketball and integrated teams tended to have no more than one or two African-American players. He ended up playing for the College of Idaho. Yes, the College of Idaho.

Then he transferred to another western school, Seattle University, a small Jesuit university with a lightly regarded basketball team that he promptly led to the finals of the 1958 N.C.A.A. tournament.

Memories fade. Baylor, one of the most superb men’s basketball players in history, graced Seattle with his talent for years. But in the city of my birth, the city where I grew up and now live, few outside of old-timers and rock-solid sports fans know of his history here. 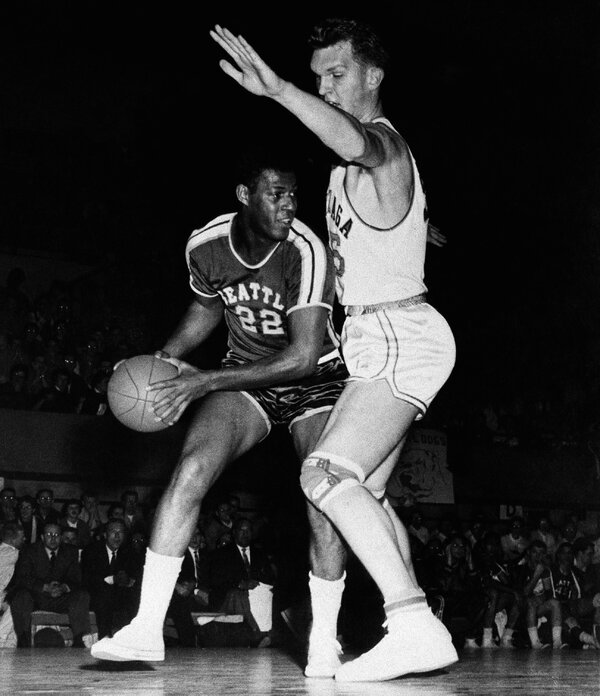 Also fading from collective recall are the 1950s years when A.A.U. basketball — then a nationwide league backed by local businesses and stocked with ex-college stars who could hold their own against counterparts in the still-fledgling N.B.A. — was a force.

That’s where my father went shoulder-to-shoulder with Baylor.

Mel Streeter was a talent in his own right then. He had played at the University of Oregon in the early 1950s, when he was the only Black player on his teams. (Imagine that as you watch the Ducks, bursting with Black talent, in the Sweet Sixteen of the men’s tournament.) After moving with my mom to Seattle, he thrived in the fast-paced, wide-open style played in Seattle’s powerful A.A.U. league, where games were played in front of packed crowds and were often featured prominently in the sports pages.

Baylor was a part of that mix. He suited up in the A.A.U. league for a powerhouse team: Westside Ford.

I wish now that I had asked my father more about his one-and-only game against Baylor, more about that league and those times. But dad died 15 years ago. As close as we were, some of his history will always be cut off from me. I don’t know what team he was on when he played against Baylor. I don’t know if it was a big game with high stakes — like the battles that helped decide who would head off to the A.A.U. national championship.

Thankfully, I have a firm recollection of the look on my father’s face as he spoke of how, in a head-to-head matchup between two tall, lithe and powerful forwards, he held Baylor to two first-half points. Oh, and dad never let any of his four sons forget that while he was holding down Baylor, he was lighting up the scoreboard. Even before my older brother Jon knew I was writing this column, the moment he heard about Baylor’s death he sent me a text with his own recollections of our family’s well-told tale: “Dad scored 11 in the first half!”

But how did the game end?

Whenever he came to the story’s backstretch, my dad would always smile and bring me close, letting me know that this short fable was not actually about him.

As it turned out, angered at being shown up, Baylor came out in the second half determined to teach Mel Streeter a lesson. As dad told it, the entire back half of the game was essentially a blur as Baylor whipped past my father for layups or arcing, orbital jump shots. Baylor didn’t just turn the tables: He made known that he was simply a different kind of cat. He shut down dad with lockdown defense, and torched dad for 24 points.

Whenever my father told this story, which was usually while we shot hoops on the basket that hung over our old garage, he never ended it sounding defeated. His smile widened and his face lit up as looked straight at me and spoke of Baylor with awe. “There was nothing I could do,” dad would say. “He was just too much.”

Dad had witnessed true genius, true athletic genius, right up close, shoulder-to-shoulder under the rim inside a packed Seattle gym. And he had loved every second of the opportunity, even as he got scorched.

That’s what I’m left with. My father’s thankfulness.

If only he’d still been alive to hear about the first time I met Baylor, who I crossed paths with while in my role as a reporter roughly a dozen years back. It happened in Los Angeles, at the old training center for the Clippers, which Baylor struggled to run as general manager for just over 20 years.

As I introduced myself, he thought for a moment about my name.

I could see he was thinking back, working his memory to make a connection.

I nudged him a bit. Without going into details, I reminded him that he’d played Mel Streeter in an old A.A.U. game.

Then he put it all together.