Questions abound for Melbourne fans after the Demons slumped to a 46-point loss to Richmond on the big stage of their Anzac Day eve clash at the MCG.

Chief executive Peter Jackson said the team trashed the club's brand in a 67-point loss to Hawthorn last week and coach Simon Goodwin conceded the erratic Demons can't be trusted on the evidence of their first four games. 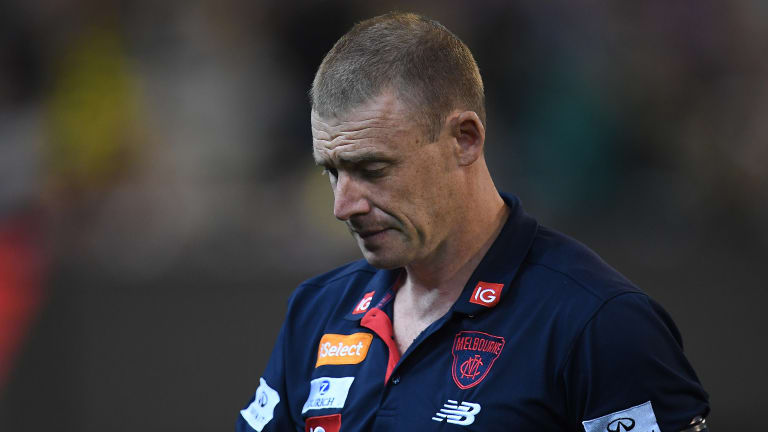 Simon Goodwin’s Demons slumped to a 2-3 record with their loss to Richmond.

"I thought the effort and intensity was strong all night until the last quarter.

"But there's clearly some things we've got to work on."

One of those areas Goodwin spoke of is the connection between his midfield and attack.

The energetic Demons had the reigning premiers on the back foot early only to be wasteful going inside attacking 50.

Then, in a continuation of a worrying trend, Goodwin's men lost their way in the second quarter, the Tigers winning the inside 50 count 19-5.

"We hung in there … I think that's what the game sometimes needs you to do," Goodwin said.

"I thought our defenders were really good for that quarter.

"The second quarter wasn't our best footy, but sometimes you're not going to play your best footy and you've got to hang in their and that's what we did.

"I can't fault the boys … I thought Richmond were very good for the whole game."

The Demons suffered a blow when Dean Kent's night ended with a hamstring injury in the dying seconds of the second quarter.