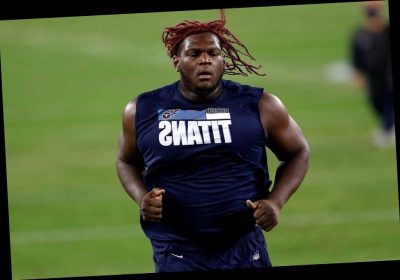 Lamar Jackson and Ravens won’t get it done

The Titans thought they were getting a future star when they drafted offensive tackle Isaiah Wilson with the 29th overall pick of the 2020 NFL Draft.

A year later, Wilson has a total of four NFL snaps under his belt. He was on the COVID-19/reserve list twice in 2020, then the reserve/non-football injury list in December. He hasn’t spoken to the team since.

Tennessee GM Jon Robinson appears fed up with his draft investment, and issued a stern warning to Wilson during a media conference on Tuesday.

“He’s going to have to make a determination on whether he wants to do what it takes to play pro football. That will be on him,” Robinson said.

“I know what the expectation level is here, and it’s no different than any other player on the football team. We have a certain standard that we want players to prepare and perform at professionally, and as people, and there’s a lot of work to be done there.”

Wilson has had multiple run-ins with the law since being drafted by the Titans. The first occurred in August, when he was cited for trespassing at Tennessee State University. According to ESPN, he walked onto a balcony and briefly considered jumping.

Then, in September, he was charged with DUI after losing control of his vehicle and crashing into a concrete wall.