Home » Sport » Todd Frazier, and the Mets, Dig In for a Series Win Over the Giants

Todd Frazier, and the Mets, Dig In for a Series Win Over the Giants After watching his teammates hit back-to-back homers in the first inning, bunt for hits twice and rally to tie the score at 3-3 on a bloop single in the seventh, Mets third baseman Todd Frazier stepped to the plate with a runner on second base in the eighth inning.

He was ahead in the count, 2-1, and San Francisco Giants reliever Mark Melancon threw an 82-mile-per-hour curveball that tested Frazier’s willingness to wait.

In tracking the break, Frazier knew he had to get underneath the ball, so he dropped his right knee to the dirt and managed to get his bottom hand under it, as well.

“I actually squared it up, as silly as that sounds,” Frazier said. “It wasn’t even a good pitch to hit. For me, to find the barrel and get it on there, I couldn’t be happier.”

It went in the scorebook as a two-run homer that propelled the Mets to a 7-3 victory and a series win over the Giants. In a week that began with Manager Mickey Callaway’s decision-making drawing criticism once more, Frazier found a way to give his middling team a matinee win on a brilliant day in Queens.

“Everybody’s producing,” Frazier said. “Win every series and we’ll be right where we need to be.”

“I’m ready for these guys to come in,” Callaway said of the Rockies. “I love the way we play in this ballpark.” 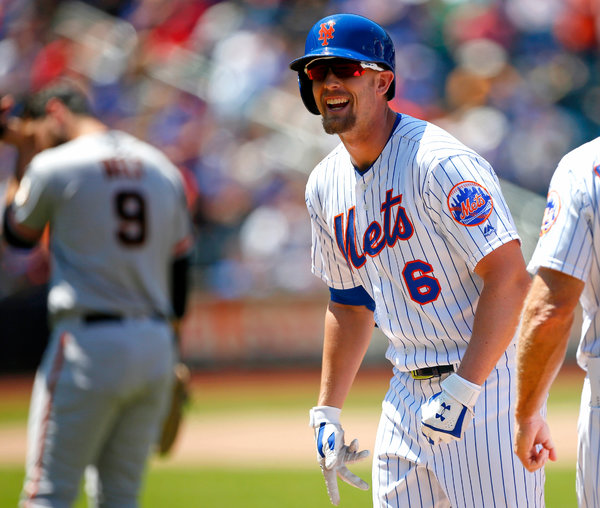 “Luckily these guys keep battling,” Wheeler said. “Got me off the hook.”

The two straight wins also got Callaway off the hook, for now. He came under more criticism after his decision to remove Syndergaard, who had thrown 103 pitches and recorded two outs in the seventh inning, backfired in the series opener. Instead of allowing Syndergaard to complete the inning with the Mets up by 3-2, Callaway removed him in a double switch. Reliever Seth Lugo replaced Syndergaard and blew the save as the Mets went on to lose, 9-3. Afterward, Callaway expressed remorse and apologized to his players in the clubhouse. He accepted all the blame.

“I’d like to have that one back,” Callaway said.

There is no question which Met offers the most calming presence, though. The leadoff hitter Jeff McNeil, whose .345 batting average was third-best in the majors before Thursday evening’s games, did not miss a beat in returning from the injured list after straining his left hamstring on Tuesday. He collected one hit in his first game and three more Wednesday and started Thursday on the bench as a scheduled day off for rest.

Then, in the seventh inning, he pinch-hit for shortstop Amed Rosario. There were runners on second and third base when McNeil drove in a run with his blooper to left-center. He listened to the crowd to learn whether the ball had fallen in or not.

“The crowd started to get louder and louder,” he said. “I’m like, that’s in no man’s land. It just happened to drop in there.”

He drove in another run with a second single in the eighth.

“He’s a guy we need in there as often as possible,” Callaway said.

While McNeil helped move the Mets around, utility infielder Adeiny Hechavarria proved that running through a stop sign from the third base coach Gary DiSarcina could be every bit as valuable, as well.

In the eighth inning, Hechavarria singled to left and started going on a hit and run when centerfielder Juan Lagares stroked a double to left. As Hechavarria approached third, Disarcina threw up both hands, but Hechavarria motored home without hesitating. He slid in to score and did not even draw a throw to home.

Callaway received his requested mulligan Tuesday night, and his team followed up with a pair of wins. But the manager and the team also know there is a difficult stretch to negotiate ahead.

Beyond the Rockies series this weekend looms a two-game Subway Series against the Yankees and another home matchup with the Cardinals.

Frazier considered what the Mets would have to do to extend their winning ways.

“Get hyped up,” Frazier said. “Get up hyped up, man. I’m excited. If you’re not excited about that you need another profession.”