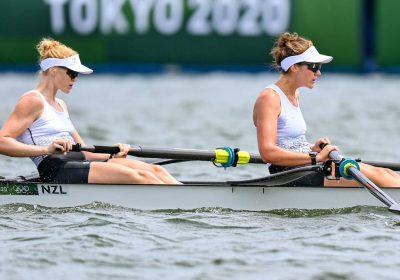 After two close calls yesterday, New Zealand have their best chance yet to claim their first gold medal of the Tokyo Olympic Games.

Here’s all you need to know about today’s action (Thursday, 29 July).

Kerri Gowler and Grace Prendergast set a world record time in their semifinal to progress to the final of the women’s pair, and, as you’d expect after a performance like that, the world champion crew have been inserted a $1.45 favourite to win gold early this afternoon.

Their closest rivals are deemed to be the Canadian crew, followed by Great Britain and Greece, who broke the world record – previously held by Gowler and Prendergast – in the first semifinal, only for the Kiwi pair to amusingly/cruelly immediately take it right back from them in the following semifinal.

While Gowler and Prendergast are gold medal favourites, another Kiwi rower in the medal mix is Emma Twigg, who competes in her semifinal this afternoon, looking to progress to a third consecutive Olympic final.

The biggest of New Zealand’s gold medal favourites are also in action today, but the Black Ferns Sevens are only beginning their campaign, while fellow Rio silver medallist Luuka Jones has a chance at a medal in the C1 canoe slalom event, but after qualifying 11th for the semifinals it would be a surprise for her to medal in her less-favoured event.

Also participating in his less-favoured event is Lewis Clareburt, who has a chance to qualify for the 200m Individual Medley final after another storming personal best in his heat last night saw him qualify third-fastest for the semifinals. However, a tough turnaround will see him again have to battle with the “morning blues”, and it would be a harsh ask to expect a better time than what he produced last night.

Finally, golfer Ryan Fox tees off in his first round this morning, and in a sport with plenty of variance, and a field not containing as many stars as some of the big events he usually plays in, he can’t be ruled out as a medal prospect.

Check the “who’s competing” interactive above to see the full list of Kiwis in action, and when they begin their events.

The Herald will have live updates running from 10am, while you can catch all the action on Sky Sport. Every event on Sky can also be watched via streaming on Sky Sport Now or Sky Go.