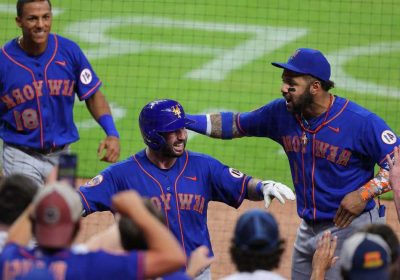 Heartbroken Met opens up after his ‘scary’ incident

ATLANTA — Tomas Nido’s bat returned him to the Mets lineup Tuesday, and that weapon of choice may keep him there.

In need of a jolt after his team flushed the lead an inning earlier, Nido stepped up in the ninth inning and launched a go-ahead homer against Will Smith that propelled the Mets to their second straight victory over the Braves, 4-3 at Truist Park.

With the team’s offseason investment at catcher, James McCann, struggling offensively and the Mets in need of hits with a depleted lineup, Nido’s bat has suddenly become necessary. He went 3-for-4 in Monday’s game, prompting manager Luis Rojas to stick with him a night later.

The victory was a morale booster for a team that placed Kevin Pillar on the injured list before the game with a broken nose, a night after he was hit in the face by a pitch. Pillar became the 12th Mets player on the IL.

Marcell Ozuna’s RBI single in the eighth tied it 3-3 afte Loup had allowed a leadoff double to pinch-hitter Ehire Adrianza. Familia entered and walked Ronald Acuna Jr. before getting Freddie Freeman to hit into a double play, but Ozuna’s broken-bat single to right tied it.

Freeman greeted May with a 446-foot blast over the center-field fence leading off the sixth to pull the Braves within 3-2. The homer was the second allowed this season by May, who has been the Mets’ most consistent reliever. Khalil Lee’s full-extension diving catch on Ozzie Albies’ drive to right-center helped the Mets avoid another threat.

The Braves’ first hit didn’t come until the fifth, when Austin Riley homered leading off the inning against Gsellman. It was the second homer in as many games for Riley.

In his major league debut, left-hander Tucker Davidson gave the Braves a chance, holding the Mets to three earned runs on five hits and one walk over six innings.

Jonathan Villar’s two-run homer in the third gave the Mets a 2-0 lead. Hunter delivered his first major league hit, a single, before Villar with two outs cleared the fence in left-center for his third homer of the season and second on the road trip.

Gsellman walked in the fourth, putting a Mets pitcher on base in a second straight plate appearance. Gsellman reached second, but Dansby Swanson’s diving catch with his back to the infield on Villar’s bloop to center prevented the Mets from scoring.

Francisco Lindor’s second hit of the game, a double leading off the sixth, led to the Mets taking a 3-1 lead. Dominic Smith singled Lindor to third before Pete Alonso’s sacrifice fly brought in the run.