Home » Sport » Tottenham ease past Watford at home in EPL

Tottenham ease past Watford at home in EPL Tottenham Hotspur's England duo Harry Kane and Dele Alli fired them to a comfortable 2-0 win over mid-table Watford at Wembley that cemented their place in the Premier League's top four.

The win put fourth-placed Spurs five points clear of Chelsea with three games remaining and within a point of Liverpool, who have two matches left, in the race for Champions League spots. 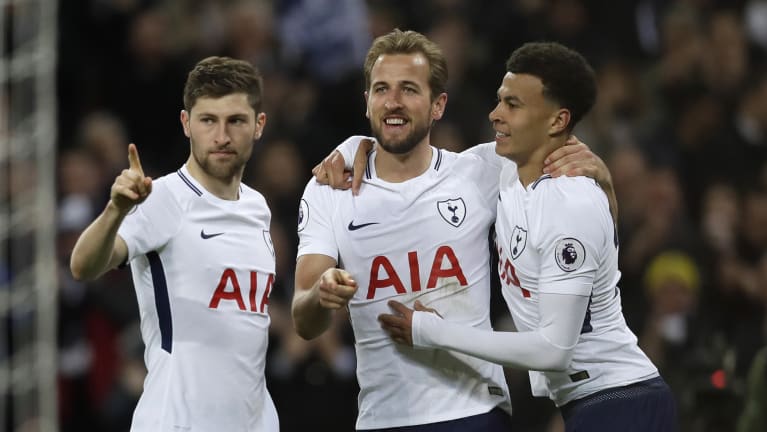 Harry Kane (centre) and Dele Alli (right) were on target for Spurs.

Tottenham took the lead after 16 minutes when Watford keeper Orestis Karnezis spilled a cross from Kieran Trippier and Christian Eriksen scooped the ball to Alli who had the simple task of stroking the ball home from near the penalty spot.

Kane put Spurs two goals ahead in the 48th when he tucked away a cross from the right by Trippier and they almost had a third when Jan Vertonghen hit the post with a late header.

Tottenham have 71 points ahead of London rivals Chelsea on 66, both from 35 games, while third-placed Liverpool have 72 from 36.

Although Spurs ran out comfortable winners against Watford in front of England manager Gareth Southgate, they had France goalkeeper Hugo Lloris to thank for some fine first-half saves.

After taking the early lead through Alli, the home side were almost made to pay for a sloppy pass by Eric Dier after 26 minutes that was intercepted by Etienne Capoue who fed Andre Gray but his low drive was saved by the diving Lloris.

The Spurs keeper was called on again twice before half-time when he made a fine save to deny Richarlison and came rushing out of goal to make a well-timed tackle on Abdoulaye Doucoure.

Tottenham, whose play had been untidy at times in the opening period, tightened up after the break and it was their talisman Kane who eased any remaining jitters with his 27th league goal of the season behind Liverpool's Mo Salah on 31.

Spurs almost had a third in the 68th minute when Belgium defender Jan Vertonghen met a Trippier free kick but his header came back off the post, while Kane had an effort ruled offside and substitute Moussa Sissoko fired over from close range.