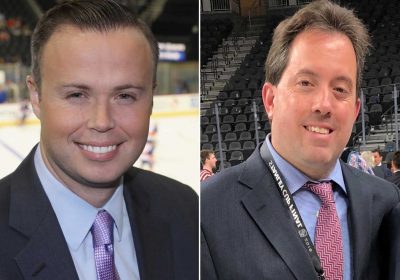 WFAN rides 'Carton & Roberts' back to the top in ESPN battle

Inside Amazon's plan to transform the sports broadcasting world

Why Ian Eagle should call the Final Four over Jim Nantz

You already know this: In the end, it is almost always the money.

So that is what happened with the NHL, which is why NBC will be out of the NHL business after this Stanley Cup,

Turner has now joined ESPN, according to sources, as the new home of the Stanley Cup beginning next year because they paid the most.

NBC had a sweetheart deal for a longtime that averaged $200 million per year. Now, the NHL will be paid around $625 million per season with ABC/ESPN and Turner splitting the games and, most importantly, Lord’s Stanley’s Cup.

Turner’s deal is much less than ESPN’s. Sources said Turner (TNT & TBS) will pay in the neighborhood of $225 million-plus per season over the seven years, while ESPN’s number is around $400 million per year and includes an extra Cup and out-of-market subscription rights.

The full extent of Turner’s agreement is not yet known and very likely includes its streaming service, HBO Max.

While owners and players will get richer, what does it all means for you, the fan?

Will this grow the game?

If you are a hockey fan, who cares? But this is always a thing during TV deals; especially when a sport’s finals partly leaves over-the-air TV (NBC, in this case) for cable.

It is not 1995 when people learned about a sporting event by watching Seinfeld. The networks aren’t really springboards, though, they do still maintain more reach.

At the end of the day, NBC’s offer went down following ESPN’s monster deal for four of the next seven Stanley Cups and then when NBC’s NFL outlay doubled to nearly $2 billion a year to keep “Sunday Night Football.” That left NBC unmotivated to budge as the NHL stared at it. NBC’s final offer was for $100 million per, according to sources, which was half of what its current deal averaged per season. Fox had moderate interest, while CBS had none, according to sources. NBC is saving its money to keep the Premier League that drives its direct to consumer Peacock subscriptions.

Turner is quietly a sports right holder behemoth. It now has the NBA, MLB, NHL, NCAA Tournament and golf’s “The Match.” Plus, it has an internet fire hose with Bleacher Report to reach potential younger fans via social.

Who will broadcast the games?

Doc Emrick retired after the Stanley Cup, meaning for its last Finals, NBC is going to have a new voice this year. If you are to place a wager, put it on Kenny Albert, who performed behind Emrick as NBC’s No. 2 for years.

Now, ABC/ESPN and Turner will build broadcasts. Turner does not have any NHL folks on its staff, except for Marv Albert, who is entering the final stages of his career.

Turner should avoid trying to be too cool for school (that was a hip saying when I was kid) with its NHL shows, as it outslicked itself with its Champions League soccer coverage that had Steve Nash miscast as an analyst, among other issues.

As for ABC/ESPN, since Steve Levy is the voice of Monday Night Football and a hockey guy, it seems hard to believe that ABC/ESPN would not turn to him as its lead NHL voice. No official decision has been made, but that is simple logic.

The NHL got its money and, guess what, its fans will have to pay more if it wants all their teams’ games. The ESPN deal does put the Stanley Cup on “free TV” with ABC for four of the seven year deals, however, for all of your local team, you will need cable and  ESPN+ subscriptions. Meanwhile, you will need cable with TNT and TBS, but there is very likely an HBO Max competent so that is another monthly subscription for hockey fans.

Direct to consumer is part of the passion economy. Sports, like hockey and soccer, with loyal, affluent fan bases, are the ultimate targets for these services. In the end, money nearly always rules.