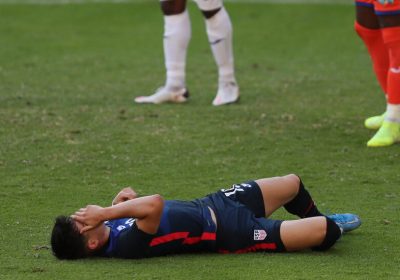 The United States failed in its latest bid to qualify for the Olympic men’s soccer tournament on Sunday, falling to Honduras, 2-1, in a regional qualifying tournament in Mexico. A goalkeeping blunder proved to be the difference, but the feeling was all too familiar.

The defeat was a humbling end to yet another Olympic qualifying campaign for the United States men, and it means the Americans will miss their third straight Olympics. A United States men’s team last appeared in the Games in 2008, and now has failed to qualify for the Olympics in four of the past five cycles.

Goals by Honduras on either side of halftime — a bundled finish by the Brooklyn-born striker Juan Carlos Obregón Jr. in first-half stopped time and a deflected goal as a disastrous mistake by goalkeeper David Ochoa minutes into the second half — proved decisive, and sent the Hondurans to their fourth straight Olympics. Honduras finished fourth in Rio de Janeiro in 2016, losing to the eventual champion, Brazil, in the semifinals.

“The goal was to qualify for the Olympics, and we didn’t get the job done today,” defender Henry Kessler said.

U.S. Soccer will still have a representative in Tokyo: Its world champion women’s team qualified last year and will be a favorite to claim its fifth gold medal in the sport when the Olympics open in July. American men’s teams have played in the Olympics four times but have never won a medal. 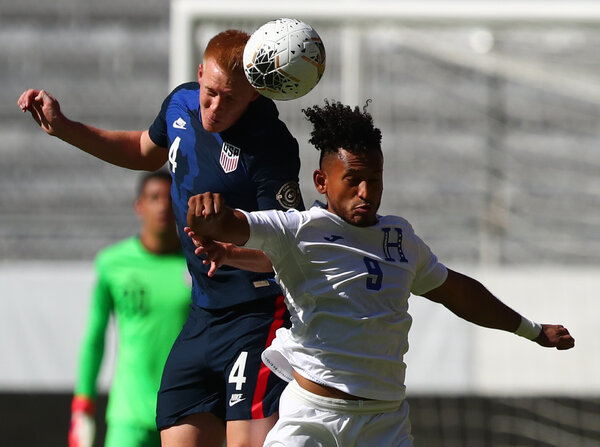 Unlike most tournaments, the Olympic qualifying event is all about the semifinals. In CONCACAF, the region that includes teams from North and Central America and the Caribbean, only the two semifinal winners advance to Tokyo, making victory in one of those matches the goal and rendering the final on Tuesday — Honduras will play the winner of Sunday’s second semifinal between Mexico and Canada — an afterthought.

United States Coach Jason Kreis and his team had Sunday’s game — whatever the opponent — on their minds all week. “Ultimately, we know the next game is the one we have to win,” Kreis had said after a 1-0 loss to Mexico in the group stage finale.

The make-or-break game played out under a scorching sun in Guadalajara, Mexico, where the temperature was 90 degrees at kickoff. The game paused for hydration breaks in each half.

The Americans tried to take control early, and produced two good scoring chances. But as Honduras held firm and settled in, the Americans seemed to run short of energy and ideas. Honduras took the lead four minutes into first-half injury time, with a long, inch-perfect cross-field pass headed expertly into the path of a charging Obregón in the goal mouth. Using his thigh, and then his hip, he clumsily muscled it over the line past Ochoa in goal.

Honduras doubled its lead less than three minutes into the second half when Ochoa — under dutiful but minimal pressure — drove a pass off forward Luis Palma that ricocheted into his own net. Scrambling to his feet, Ochoa quickly fished the ball out of his net, but the Americans’ day suddenly had taken on a grim aura.

Midfielder Jackson Yueill, the United States captain, got a goal back in the 52nd minute with a rocketed shot from just outside the circle atop the Honduran penalty area. And Jonathan Lewis had three excellent chances to tie the score — one on a header cleared off the line, another lost to a mystery foul spotted by the Salvadoran referee — as the tension built and the time ticked away. But the goals the United States needed never arrived.

The two games in Mexico on Sunday completed the 16-team Olympic men’s field, which already includes teams like host Japan; Brazil (the gold medalist at home in 2016) and Argentina from South America; France, Germany, Romania and Spain from Europe; Egypt, South Africa and Ivory Coast from Africa; Australia, Saudi Arabia and South Korea from Asia; and New Zealand from Oceania.

The Olympic men’s tournament has been an under-23 championship since 1992, an accommodation with FIFA, the sport’s global governing body, to maintain the primacy of the World Cup as the sport’s showcase event. (The women’s Olympic tournament is, like the Women’s World Cup, contested by senior national teams.)

But it remains an important barometer of a country’s ability to produce young talent, and for a regional force like the United States, which was still reckoning with its senior national team’s stunning failure to qualify for the 2018 World Cup in Russia, missing out again and again had become a referendum on the nation’s soccer progress.

Once a regular in the men’s event, the United States last appeared in it at the 2008 Beijing Summer Games, when it won only its opening game against Japan, tumbled out after the group stage and finished ninth. But soon, missing the Olympics troublingly became the norm. The Americans, who had failed to qualify for the 2004 Athens Games, then missed out on both the London Olympics in 2012 and the Rio Games in 2016.

U.S. Soccer made reversing that recent history a priority this year. It hired Kreis, a veteran of several head coaching jobs in Major League Soccer, to lead the team, and tried to take full advantage of some of the talent produced by the league’s recent investment in player development. All 11 United States starters on Sunday play for teams in M.L.S.

The Americans beat Costa Rica (1-0) and the Dominican Republic (4-0) in their first two games, but an errant pass led to a first-half goal — and a 1-0 defeat — against Mexico in their group-stage finale. The defeat was a blow to the United States team’s momentum, and perhaps to its psyche, as it represented the first big test of the event, but Kreis moved quickly to dismiss it and turn his team’s focus to the semifinal.

“I think we’ve been searching for a little more sharpness in this whole tournament,” Kreis said after the loss. But the only thing that mattered, he added, was not that result but that “the most important game is coming.”

It came on Sunday. And the Americans lost it.