Waratahs' Phipps thrown out of pub for urinating on bar The Waratahs' bid to get their season back on track has been dealt a blow with revelations halfback Nick Phipps was thrown out of a Sydney pub after urinating on the bar.

The Waratahs are investigating the incident, which occurred at the Woollahra Hotel about 9.45pm on April 21. A witness has told Fairfax Media that security personnel removed Phipps from the packed upstairs section after staff members spotted him urinating on the front of the bar.

It was the halfback's bucks party and the night after the Waratahs' dismal 29-0 home loss to the Lions. Phipps and a group including NSW and Australian captain Michael Hooper were in the hotel after a long day celebrating the 29-year-old's impending marriage. The 61-Test halfback was dressed as a cow, the witness said. 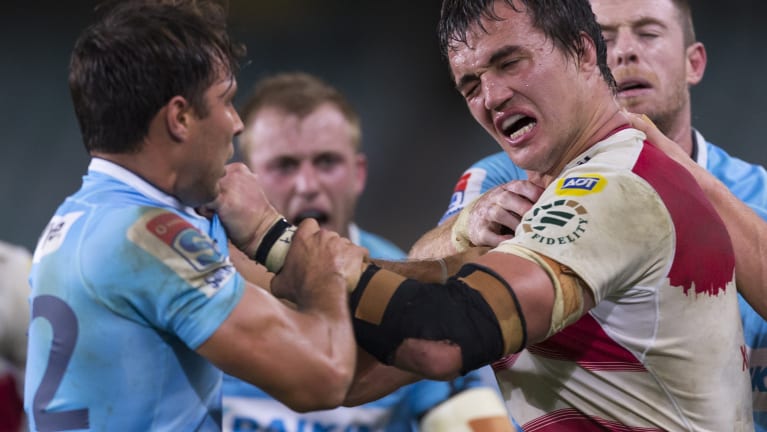 Handbags: Phipps made his playing return this season in the Waratahs’ 29-0 loss to the Lions.

"The Waratahs are aware of an incident involving halfback Nick Phipps," the club said in a statement. "The matter is being reviewed and while this process is ongoing, the NSW Waratahs are unable to comment at this time."

Fairfax Media understands the group had celebrated the last days of Phipps' bachelor life with a round of golf at North Bondi in the morning and a boat cruise in the afternoon. By the time the party arrived at the Woollahra Hotel, Phipps and others were "pretty blind", the witness said.

After walking up to the bar and urinating on the front, an apologetic Phipps was removed without further incident and put in a taxi by his friends, Fairfax Media was told. The group continued the celebrations without him. It is understood he called publican Ben Lawler to apologise in the days following.

The Waratahs were on a bye week, a period many players use to take holidays and unwind from the grind of the regular Super Rugby season. The squad returned for a training session last Thursday and Phipps married long-term partner Ebony Bamford, a finance specialist with Macquarie Group, on Saturday.

The hotel did not take the matter further and Phipps, who has an otherwise unblemished record, returned to the pub with his family on Sunday, the day after the couple's wedding. 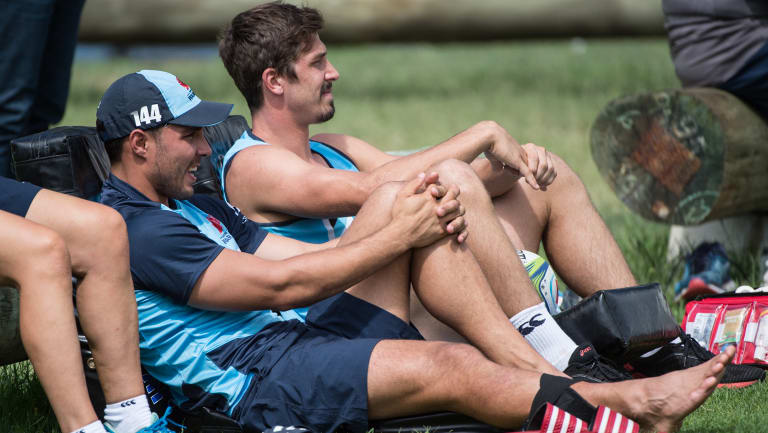 It is an untimely distraction for the Waratahs, who are desperate to move on from off-field controversies and talk up Saturday's clash with the Blues at Brookvale Oval.

The organisation spent the better part of a month bogged down in the drama surrounding Israel Folau’s beliefs about gay people, were held scoreless for the first time in Super Rugby historyagainst the Lions and last week announced 2017 financial results that paint a sorry picture of the game's health in Sydney and NSW.

Ticketing and membership sales fell 24 per cent last year and sponsorship and hospitality revenue fell 13 per cent. The organisation was forced to slash budgets in other divisions to announce a break-even result across the year.

Saturday's fixture at Brookvale presents an opportunity to hit the reset button. Folau was back training with the team on Monday after a month sidelined with a hamstring injury and the squad were in high spirits after a few days' break.

The Waratahs are three-points clear of the Rebels at the top of the Australian conference ladder and, until the Lions loss, were sitting on an unbroken run of four wins. They face their toughest block of games next, with four matches on the trot against New Zealand teams and an away clash with Queensland before the competition breaks for the June Test series.

Phipps spent the early part of the season a frustrated onlooker as he recovered from a calf strain. He returned off the bench in the Waratahs' 37-16 win against the Reds in round nine and also came off the bench against the Lions. He and other long-time NSW players were also rocked by the career-ending injury suffered by close friend and former teammate Rob Horne last month.