TYSON FURY'S kids stole the show as he attempted to do a home workout on Instagram live.

The heavyweight has urged his fans to obey Boris Johnson's orders to stay indoors due to the coronavirus outbreak. 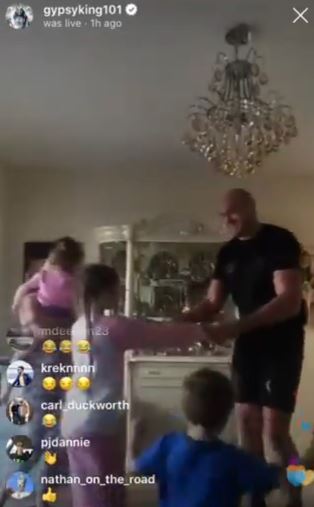 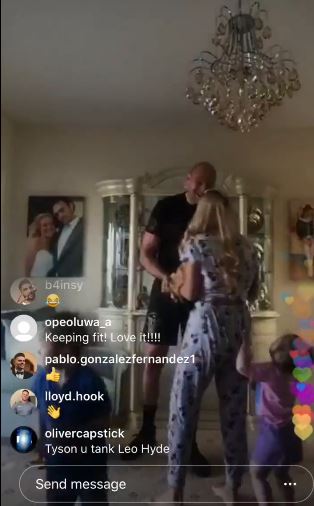 Fury has decided to post daily home workout videos to his Instagram to inspire others to keep fit while in self-isolation.

The WBC champion kicked off Tuesday morning's session with a message for his 3.6million followers.

He said: "Hello, good morning world. I said I'd do a live video of training and stuff, and that's what I'm gonna do.

"Every day I'm going to do a live video of me doing a bit of training and everyone can join in as well if they want."

Fury's kids took up his offer and decided to gatecrash his workout – which was taking place in the living room of his modest Morecambe home.

The session started with Fury dancing behind his wife Paris as she did a few bicep curls.

As the Gypsy King did a few burpees, his eldest daughter Venezuela, 10, threw a few shapes in the background and waved at the camera.

And before he knew it, Fury's workout descended into chaos as his kids ran riot in the living room.

As Paris yelled at son Prince to find the television remote, his daughter screamed with her arms held high in the air.

Fury's son showed off some of his best moves while the heavyweight danced hand in hand with Venezuela.

The heavyweight champ ended the clip with a message to all of his fans, as he said: "I hope you've all enjoyed that, I've got a bit of a sweat on.

"I'm going to be doing two sessions per day because we've got nothing else to do.

"I'm going to stay indoors and I'm not going to go out and spread this disease, I'm going to do what the Prime Minister says."