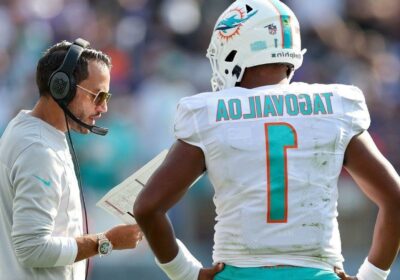 Week 2 of the 2022 fantasy football season featured plenty of notable performances, but none stood out more than Tua Tagovailoa and the Dolphins’ offense. Wow! What should we make of them? And which developments from Week 2 are worth reading into? Matt Bowen and Tristan H. Cockcroft offer their analysis.

I must offer a mea culpa to my wise colleague, Mr. Bowen, as during our early-game chat, I insisted that before I trust Tagovailoa with chucking the ball deep while playing from behind, I’d first need to see the proof. Well, that proof has come, in the form of a 38.86-fantasy-point, franchise-record-six-touchdown performance. Tagovailoa seemed plenty comfortable airing things out to his top two receivers, Tyreek Hill and Jaylen Waddle, and he even had a nice end zone throw to tight end Mike Gesicki. Tagovailoa’s accuracy wasn’t pinpoint, but working with two of the game’s best big-play wide receivers is obviously helping him, and there’s no question I’d want him in my lineup against any bottom-half NFL defense. He’ll probably regress to QB12-15 production in Week 3 against the Bills, but give me those Jets (Week 5), Steelers (Week 7) and Lions (Week 8) matchups all day. — Cockcroft

Tristan, we did see Tua take some vertical shots in this one. But I still go back to the core pass concepts in this Miami offense, which create timing and rhythm throws for Tua to target the second level of the field. And when you have difference-making speed out there in Hill and Waddle, the opportunity for explosive plays jumps up on schemed crossers, slants and quicks. — Bowen

Regression, shmegression. Amon-Ra St. Brown crushed his previous personal best for PPR fantasy points in Week 2, scoring 39.4, including a pair of pretty plays such as his 58-yard end-around scamper and 11-yard score midway through the fourth quarter. More importantly, though, he absorbed a 35% target share (12-of-34) a week after he had a 32% share (12-of-37) in the season opener, continuing to cement his status as Jared Goff’s go-to guy. St. Brown now has double-digit targets in every game since Week 13 of last season, as well as a league-leading 210.9 points during that time — though Cooper Kupp and a few other players (if they have huge games) could catch him for the honor later in Week 2. With his quarterback’s eye, elite skills and a defense that will put the rapidly improving Lions offense in passing situations, St. Brown sure has the look of a league winner again. — Cockcroft

The game script for Miami went off the rails today, which led to Jaylen Waddle seeing 19 targets in the comeback win over Baltimore. However, it was a good look at how Mike McDaniel will deploy the receiver in his system, with in-breakers, screens and schemed verticals. Waddle has game-breaking ability, as well as instant speed after the catch, which meshes with Tua’s traits as a thrower. Waddle finished with 11 grabs for 171 yards and two scores — which was good for 40.1 PPR points. It was a ridiculous day for the second-year pro, who will be a solid WR2 in a tough Week 3 matchup versus the Bills’ defense. — Bowen

Fun fact: Waddle and Tyreek Hill became the first pair of wide receivers to score 40-plus PPR fantasy points in the same game since 1954. — Cockcroft

You can lock in D’Andre Swift as a top-five RB moving forward, regardless of the matchup. On Sunday, in a reduced role due to an ankle injury, Swift accounted for 16.7 PPR points — on only six touches — in the Lions’ win over the Commanders. We can all see the juice he brings to the Detroit run game. Find open daylight and go. That’s the vision and the short-area speed to get into the open field. He’s producing as a receiver, too, with 62 yards and a score on six grabs over the first two weeks of the season. And this Lions offense can move the ball. It’s well schemed. Swift and Detroit get a divisional game up next versus the Vikings. — Bowen

Having Jacoby Brissett at quarterback hasn’t seemed to hinder the Browns’ running game, which is responsible for 401 yards and four touchdowns through two weeks. Nick Chubb had three of the scores on Sunday, resulting in 32.3 PPR fantasy points, and he looks like a heavy-volume back in what is a fantasy-friendly early portion of the team’s schedule. Make sure to have him in every lineup as a borderline RB1. — Cockcroft

Top-five runner in the league, Tristan. That’s how I view Chubb — in a volume-rushing offense. Easy money in your lineup — Bowen

Lamar Jackson, QB, Baltimore Ravens: He became the first quarterback in history with passing and rushing touchdowns of at least 75 yards in the same game, plus he set a new personal best with his 42.62 fantasy points. Despite all that, Jackson’s performance was overshadowed by the extraordinary performance of Tagovailoa and the Dolphins’ incredible comeback win. This was a game of speed and big plays, and Jackson was at his best and hardly to blame (that falls squarely on Miami’s defense). Like the Yankees’ Aaron Judge (who his 58th and 59th homers today), Jackson is playing like a man motivated for a big, new contract — and this comes from a guy who generally does not believe in contract-year players. I don’t think I’d remove him from my positional top five even against tougher defenses, like his Week 4 against the Bills. He’s got the Patriots up next. — Cockcroft

I’m with you on Lamar. He’s throwing the ball with velocity and location and targeting all three levels of the field. Plus, he’s simply the league’s most electric player with the ball in his hands — on designed rushes or scramble attempts. — Bowen

Tom Brady, QB, Tampa Bay Buccaneers: Is Brady a QB1 next week? I think it’s a fair question after he posted just 9.4 points in the Bucs’ Week 2 win over the Saints. Yes, that’s a tough matchup for Brady. Dennis Allen’s defense can scheme against the veteran quarterback. The Bucs have injuries at wide receiver and up front, too. But Brady didn’t produce big numbers (10.38 points) in the Bucs’ Week 1 game versus Dallas, either. Right now, this is an offense in transition, and Tampa gets the Green Bay defense in Week 3. — Bowen

Rams running backs: After a Thursday NFL kickoff in which Cam Akers’ limited usage became one of the opening week’s biggest storylines, he narrowed the usage gap with Darrell Henderson Jr. in Week 2, playing 43.5% of the offensive snaps to Henderson’s 56.5%, while winning the total-touches race 17 to 10. Henderson, nevertheless, had the highest-speed run of the duo (16.7 mph, per NFL Next Gen Stats) as well as the Rams’ only rushing touchdown, signals that he’s still very much involved in the backfield mix. Henderson needs to remain your Rams running back of choice in fantasy, though Akers’ stock rose a little. — Cockcroft

Christian Kirk, WR, Jacksonville Jaguars: Kirk posted 25.8 points in the Jags’ Week 2 win over the Colts, but it was the scoring plays that stood out to me. Both of his touchdowns were schemed concepts inside the red zone. There was the angle route from a backfield alignment, then the “hide” boot scheme with Kirk releasing behind the line of scrimmage to the opposite flat. Kirk has now caught 12 of 18 targets for 195 yards in his first two games with the Jags. He’ll remain a WR3 next week with a matchup versus the Chargers. — Bowen

Dameon Pierce, RB, Houston Texans: After sharing carries with Rex Burkhead in Week 1, Pierce was the clear lead back on Sunday versus the Broncos, rushing for 69 yards on 15 carries. And I’m really just looking at the volume here. If that remains consistent for Pierce, he can make it into your lineup as a possible flex play. Running downhill and physical, Pierce invites contact and has the footwork to shake defenders. — Bowen

Drake London, WR, Atlanta Falcons: London checked in with 24.6 PPR points versus the Rams. The system fit is there. So is the volume. The rookie saw 12 targets in this one, catching eight passes for 86 yards and a touchdown (on a low red zone throw). London now sits at 13-of-19 targets after two pro games. He’ll move up the ranks for me this week. Start him as a solid WR3 versus the Seahawks’ defense next Sunday. — Bowen

Garrett Wilson, WR, New York Jets: Rostered in 70.3% of ESPN leagues, Wilson is a must add this week after dropping 30.0 PPR points in the Jets’ comeback win over the Browns on Sunday. The rookie caught 8 of 14 targets in this one for 102 yards and two scores — including the game winner. Dynamic and extremely sudden, Wilson showed his ability to shake press in the red zone, and he can get loose in space. The Ohio State product gets a Week 3 matchup with the Bengals next. He’s a deeper-league WR3. — Bowen

Curtis Samuel, WR, Washington Commanders: You can keep Samuel in the WR3 mix for next week’s matchup versus the Eagles. The wide receiver posted 22.9 PPR points in Sunday’s loss to the Lions, after recording 19.2 points in Week 1. Samuel has scored a touchdown in both games to start the season. The pass game volume is there. And his versatility creates opportunities in this offense on manufactured touches. — Bowen

Matt Ryan, QB, Indianapolis Colts: His and the Colts’ Week 2 performances were just about as far from the “rebound” label as can be, as the Colts were shut out by the division-rival Jaguars 24-0. Ryan fumbled again, giving him five (only one lost, fortunately) for the season and was intercepted three times, bringing back painful memories of Carson Wentz’s turnover-prone play. Worse yet, Ryan’s inability to get things done caused a 10-touch, 7.3 PPR fantasy point day for star running back Jonathan Taylor, one of the worst of his career to date, and the team needs to get straightened out fast in order to alleviate any panic there. Michael Pittman Jr.’s absence had a decent amount to do with this, but the offensive line performed poorly and Ryan doesn’t look close to trustworthy, even in 2QB/superflex leagues. — Cockcroft

I agree on the impact on the wide receiver injuries here, Tristan. And the poor play from the Colts’ offensive line really exposed Ryan’s diminished movement skills. He needs defined, rhythm throws and clean platforms to produce consistent numbers. — Bowen