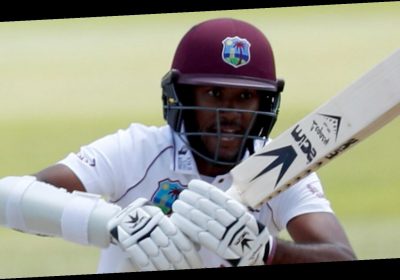 West Indies captain Kraigg Brathwaite led from the front as he scored an unbeaten 99 to help the West Indies recover to 287-7 by stumps on day one of the second Test against Sri Lanka in Antigua.

Brathwaite shared in an unbeaten 65-run partnership with Rahkeem Cornwall (43no), wrestling the impetus the way of the home side after a see-sawing opening day.

Brathwaite batted cautiously, his innings using up 239 deliveries, while more adventurous team mates fell around him after Sri Lanka won the toss and put their hosts into bat.

Brathwaite survived a massive chance when he was on 37. A healthy edge off a Vishwa Fernando delivery was dropped at third slip by Oshada Fernando when the Windies were only 113-3.

Sri Lanka opening bowler Suranga Lakmal (3-71) made early inroads, taking the wickets of John Campbell (5) and Nkrumah Bonner (0) in the morning session, piling on the pressure with six successive maidens.

Kyle Mayers countered for the West Indies, scoring 49 off 61 balls as he put on 71 runs with Brathwaite for the third wicket.

Jermaine Blackwood (18) and Jason Holder (30) departed before tea and wicketkeeper Joshua da Siva hung around for 35 balls but scored just one run before being caught behind off Dushmantha Chameera.

Alzarri Joseph also batted with aggression before being trapped lbw by Lasith Embuldeniya for 29, having been dropped just an over earlier, but it was Cornwall who saw his skipper to the cusp of a ninth Test century.

The first test, also at the Sir Vivian Richards Stadium, ended in a draw.