The Atlanta Falcons, winless through five games this season, have fired their head coach, Dan Quinn, and general manager, Thomas Dimitroff, becoming the second team to reassess its fading prospects for the 2020 campaign.

“Decisions like these are very difficult, but the previous two seasons and start to this one have been especially hard for me because of the deep love, admiration and respect I and my family have for Dan, Thomas and their families,” the team owner Arthur Blank said in a statement Sunday night. “But as everyone knows, this is a results business and I owe it to our fans to put the best product we can on the field.”

Rich McKay, the team’s president, will take over daily oversight of football operations while Blank finds new leadership. Blank will name an interim coach on Monday or Tuesday. Two members of Quinn’s staff, the defensive coordinator Raheem Morris and the offensive coordinator Dirk Koetter, have been N.F.L. head coaches before.

The firings in Atlanta came one week after the Houston Texans fired Bill O’Brien, the team’s longtime coach who had also recently become its general manager. In a season of wrenching change and accommodation brought on by the coronavirus pandemic, the firings were a reminder that the N.F.L. is a cutthroat, win-at-all-costs business.

Other coaches remain in the hot seat, most notably Adam Gase, whose Jets (0-5) are also winless.

O’Brien’s firing was perhaps more curious because the Texans seemed to be on the rise. They won 11 games in 2018 and 10 in 2019, making the playoffs in four out of the last five years. The Texans also started this season against the Kansas City Chiefs, Baltimore Ravens and Pittsburgh Steelers, three formidable foes.

O’Brien was also given the general manager’s title in the off-season. Under interim coach Romeo Crennel, the Texans earned their first win on Sunday, beating the Jacksonville Jaguars, 30-14.

Blank had also endorsed Quinn and Dimitroff in the off-season. It was the first time during Blank’s 18-year ownership of the team that he did not fire a coach after consecutive non-winning seasons.

Blank hoped Quinn and the Falcons could bounce back after two straight 7-9 seasons and return to the playoffs for the first time since 2017. Last season, the Falcons started 1-7 but were 6-2 in the second half. 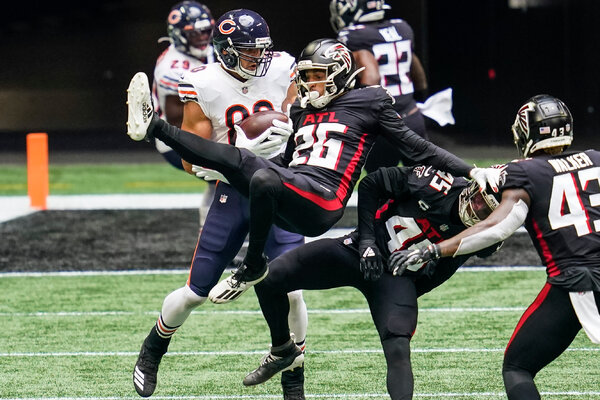 But this year, the team’s season quickly went from bad to worse. After losing their opening game against the Seattle Seahawks at home, the Falcons blew double-digit leads to the Dallas Cowboys and Chicago Bears. The loss to the Cowboys was particularly unsettling because the Falcons misplayed a Dallas onside kick that, had it been recovered, probably would have secured a victory.

On Sunday, the Falcons lost their fifth straight game, falling to the Carolina Panthers at home, 23-16. The Falcons head to Minneapolis to play the Vikings on Sunday.

The Falcons have given up 161 points, tied with the Jets for second-most in the league. Their chances of making the playoffs have been made even more difficult by playing in the N.F.C. South, which includes the New Orleans Saints (2-2) and the Tampa Bay Buccaneers (3-2).

In his six seasons in Atlanta, Quinn had a 43-42 record in the regular season and was 3-2 in the playoffs. In his second season, he guided the Falcons to the Super Bowl, where they blew a 28-3 lead to the New England Patriots. Before taking the Falcons job, Quinn was the defensive coordinator for two years in Seattle when the Seahawks appeared in two straight Super Bowls.

Dimitroff was in his 13th season as general manager. Since his arrival in 2008, the Falcons have been 109-88 with seven winning seasons and six trips to the playoffs. Dimitroff drafted some of the best players in Falcons history, including quarterback Matt Ryan, wide receiver Julio Jones, offensive lineman Jake Matthews and defensive lineman Grady Jarrett.