Home » Sport » Was it worse than biting? Peni hit with suspension for high tackle

Was it worse than biting? Peni hit with suspension for high tackle ACT Brumbies winger Chance Peni has been slapped with a bizarre seven-week suspension, despite the SANZAAR judiciary issuing a six-week ban for a player who was guilty of biting an opponent.

The Brumbies have accepted the decision of the SANZAAR foul play panel, which was so severe because of two previous suspensions in the past 12 months, but the club has plenty of reason to feel aggrieved given the vast inconsistencies. 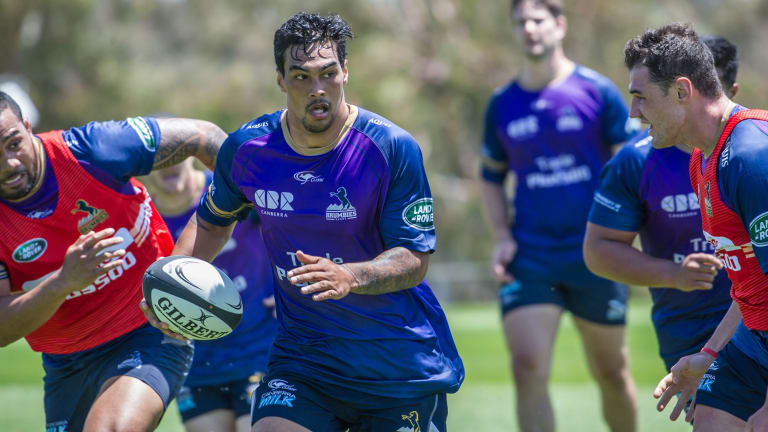 Chance Peni has been suspended for seven weeks.

Peni was penalised for a high tackle on Canterbury Crusaders fullback Israel Dagg last weekend and the suspension will be enforced until June 17.

There was confusion after the initial hearing on Monday night, when the Brumbies were initially told Peni would be suspended for five weeks.

But when the club asked for clarification, SANZAAR extended to ban to seven weeks and ruled Peni's suspension could not be served in Canberra club rugby games.

Peni's suspension was not eligible for a downgrading in punishment because it was the second time in less than a year he had been cited and suspended for foul play.

The frustration in Super Rugby stems from the judiciary debacle, which has been known to hand out ridiculous punishments.

But Schoeman's punishment was reduced from 12 weeks to six because he showed remorse and a previous clean record.

It effectively means Peni has been hit with a harsher ban for a high tackle despite Schoeman sinking his teeth into an opponent.

The judiciary has also ruled this year that a dangerous neck roll on David Pocock and mid-air collisions involving Tom Banks and Andy Muirhead did not warrant any suspension.

Peni's tackle on Dagg was ugly, but it was hoped the suspension would be reduced because Dagg was falling and injured his knee. Peni has apologised to Dagg on social media.

"The player has received two previous periods of suspension for similar incidents in the preceding 12 months, and the foul play review committee added a further week to the sanction for that aggravating factor.

"However, taking into account mitigating factors including the Player's remorse shown on field and his pleading guilty at the first available opportunity, the foul play review committee reduced the suspension to [five] weeks.

"The player is therefore suspended for [five] weeks, up to and including the 17 June 2018.”

Bulls front-rower Schoeman was cited for biting Hardwick on April 21. The low-end entry point punishment for biting is 12 weeks.

But Schoeman's ban was cut in half because of his good record and good character, allowing him to return to play in just six weeks.