Home » Sport » Yankees’ J.A. Happ Wrestles With Being a Fly-Ball Pitcher in a Home-Run Era

Yankees’ J.A. Happ Wrestles With Being a Fly-Ball Pitcher in a Home-Run Era TORONTO — Through most of his 13-year major league career, J.A. Happ has made a living inducing fly balls. They account for nearly 40 percent of his pitches that hitters put in play, which ranks him fifth among pitchers with at least 1,500 innings since 2009.

Being a fly ball pitcher in 2019, though, is quite treacherous. Four of the five highest home-run rates in an M.L.B. season have come since 2016 (the fifth season, 2000, was before steroid testing). Hitters are on pace this season to shatter the home run record set in 2017, and 1,135 balls left the field in May — the most homers ever in a calendar month, according to the Elias Sports Bureau.

That spike is most painful for pitchers like Happ. He is on pace to allow more home runs in a season than he ever has before.

After a rough first month of this season, Happ steadily improved in May. But even when he pitched solidly, he gave up a steady diet of home runs. Through 12 starts, he has allowed 15 homers — at least one in all but two games. In 31 total starts last season for the Toronto Blue Jays and the Yankees, he allowed a career-high 27.

“I don’t know quite how to explain it,” Happ said this week. “I’m not trying to get too deep into the conspiracy theories. I want to give credit where credit is due. And guys may be changing their swings or maybe having a better path to the ball or …”

Happ, a 36-year-old left-hander, paused to choose his words carefully. “I don’t know,” he said, “but it seems like it happened real quick.”

Although there are many contributing factors, one trend is obvious in Happ’s statistics. His highest fly-ball rates came in 2011 (44 percent) and in 2013 (46 percent), according to Fangraphs. But those were not the years that the highest percentage of fly balls that he allowed became home runs. The top three would be 2017, 2018 and this season, each one higher than the last, mimicking a spike across the majors.

Still, Happ isn’t making excuses. After rough games, he hasn’t blamed the overall home run surge or referred to claims that the ball itself has changed. Entering his Thursday start against his old team, the Blue Jays, he knows he hasn’t pitched quite like himself. His 4.83 earned run average (through 63⅓ innings) is his highest since 2011.

There are many theories as to what led to the increased slugging: Pitchers are throwing harder than ever and with drastic movement, and since batters are increasingly encouraged to try to hit home runs, they have tailored their swings to do just that. 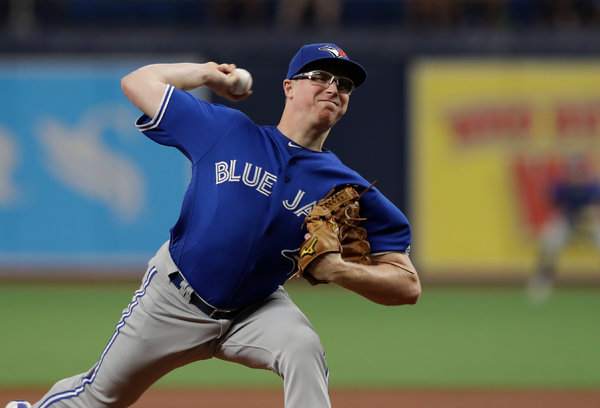 Commissioner Rob Manfred has repeatedly insisted that nothing about the manufacturing or specifications of the ball had changed. But an M.L.B. report released last year found that the main factor in the increased home run rates was that balls inexplicably had less drag and thus traveled farther.

This all leaves Happ, who re-signed with the Yankees for two years and $34 million this off-season, with a critical question: How can a fly-ball pitcher survive in this era?

“Keep going and keep trying to pitch,” he said. “I don’t have an answer for how I’m specifically combating that, other than trying to be as accurate as I can with execution and then just take your chances and hope that the percentages come down. But you see, that’s the way the game is going.”

There could be another combination of factors affecting Happ’s performance. His average fastball velocity this season is 90.5 miles per hour, down from 92 last season and below his career average of 91.1. Happ has toggled between his tailing four-seam fastball and his sinking two-seamer, while mixing in a slider and changeup.

“It just becomes a matter of executing pitches,” said Larry Rothschild, the Yankees’ pitching coach. “I don’t really know if he’s really hit his stride right now. He’s getting close. That’ll all take care of itself. But there is point of, ‘Yeah, fly balls go out of the park now.’”

The Blue Jays’ Trent Thornton, a rookie starting pitcher who also relies on fly-ball outs, can relate to Happ.

“It’s just about having to execute your pitch a little bit more and make sure you’re hitting your spots,” Thornton, 25, said. “Because if you’re a guy that lives up in the zone — up and down, rather than side to side — and you miss a pitch over the plate, then it’s going to get hit. So there’s just a little bit less room for error. But if you just make your pitch, it pays off a lot more.”

By that, Thornton meant a strikeout, because swinging for the fences makes a batter more likely to miss. The M.L.B. strikeout rate has risen in sync with the home run average in recent years, to record highs.

Happ’s strikeout rate is down from his career-high mark last season. His four-seam fastball, which is effective for strikeouts, is being hit harder this season than it was during his All-Star 2018 campaign. Twelve of the 15 home runs he has allowed this season have come on that pitch, even though he has thrown it less frequently than last year.

Baseball is often cyclical: An adjustment by pitchers is reversed by batters, and so on. Perhaps this simply is a better time for pitchers who do not specialize in getting fly balls.