Yankees rebound for split with Mets after Game 1 disaster 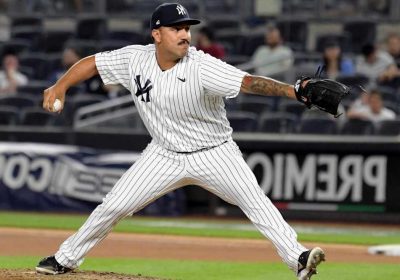 What had Mets pitcher still feeling ‘amazing’ after shaky return

Aroldis Chapman melts down again in Yankees’ loss to Mets

The Yankees played their ace in Game 1 and still ended up folding to the Mets.

They played their wild card in Game 2 — with a much steadier hand to close it out — and salvaged a doubleheader split on an otherwise brutal day for the home team at Yankee Stadium.

A funky Nestor Cortes Jr. delivered a solid spot start and Chad Green did what his bullpen mates couldn’t earlier in the day, protecting a lead with three scoreless innings, to close out a 4-2 win over the Mets on Sunday night.

Cortes gave up one run over 3 ⅓ innings — the same length Gerrit Cole provided the Yankees in Game 1 — to cool off the Mets, who had erupted with a six-run seventh inning off Aroldis Chapman and Lucas Luetge for a 10-5 win in the opener.