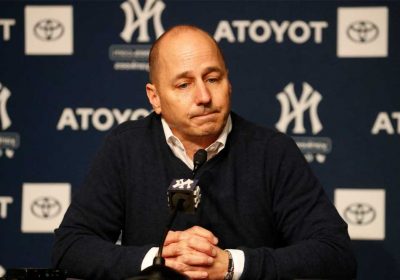 How MLB can tweak rules to help fix its offense problem: Sherman

Why would they change? The Yankees, after all, had the third-best record in the majors from 2017-20 with a title chance in each, and it was their power-doused lineup that most led the way.

They averaged at least 5.25 runs in every one of those seasons, producing four of the best 15 averages in those four seasons, when no other team had even three of the best 32.

There was always that sense they were too right-handed, too lacking in ways to create runs if they did not hit the ball out of the park, too susceptible to the best pitching — aka the kind you see in the postseason — and always too willing to trade defense for more offense. They built an offense with essentially one way to score. If that suddenly were limited, then what?

The answer is they were going to look like the playoff Knicks with Julius Randle unplugged by the Hawks. There are just not that many other ways they can score. One-third of the way into the season, that is the 2021 Yankees.

“I don’t have an answer why we have struggled so far,” Brian Cashman said. “It is my job with my guys to improve the current circumstances.”

I asked Cashman if he had grown too stubborn in the “big, hairy monster” philosophy by — among other things — duplicating much of Aaron Judge’s skill set with Giancarlo Stanton; sticking with Gary Sanchez and Clint Frazier for years as if to prove a point; the same with making Gleyber Torres a shortstop. Cashman said he knew what was available in the market and with the dollars allocated and that the decisions to, say, stick with Sanchez included, “If not Sanchez, then who?” And the answers were not great.

But I wonder about intractability in becoming so much of one thing, leaving few outlets if that way becomes easier to defend. The Yankees, say, were never going to forego offense in center field to have defensive brilliance with someone like Kevin Kiermaier as Tampa Bay has done. There were probably moments when, on paper, a lefty hitter would have felt like a talent retreat — especially in power — but it would have given opponents a diversity that offers value.

Instead, the Yankees have locked into a group when the realities of 2021 might be working against them as much as any team. The ball was somewhat deadened to diminish the impact of power. With computer programs, teams can define and exploit holes in hitters’ swings more than ever, and, generally, power hitters have more holes.

Pitchers have legal ways to increase velocity and spin rate by using weighted balls and slow-motion cameras to improve, among other things, efficiency. Also many pitchers are using illegal, sticky substances to improve, notably, spin rate to create fiercer breaks and better carry in the zone.

The combination has made it like playoff pitching on a daily basis. And every club is carrying at least 13 pitchers, so — for example — plenty of overpowering righty relievers to find long lanes of success if an opponent is overridden with righty bats.

An executive from a recent Yankees opponent said, “They are not as daunting. You give me righty starters and relievers with plus stuff, and I feel comfortable against them.”

The Yankees were averaging 3.74 runs per game. That would be the lowest since the 95-loss 1990 Yankees, who used Mel Hall as a primary cleanup hitter.

After being first or second in the AL in homers the past four years, the Yanks are tied for eighth this year, heading into Tuesday. Nearly everything else in their offensive holster impairs run scoring by not maximizing bases. They are last in the majors in doubles, triples and steals. They have made the most outs on the bases and hit into the most double plays.

Going into Tuesday, they had — for example — 13 plate appearances with the bases loaded and no outs. They were 1-for-12 with a sacrifice fly and seven double plays. The lone hit was the softest struck ball by the Yanks on May 8 versus Washington, a 49.5 mph walk-off squibbler by Gleyber Torres.

And lefty Yankees hitters are last in the majors in batting average (.183), on-base percentage (.284) and slugging (.291). All of this places a greater burden on the righty hitters to brutalize, and, aside from Aaron Judge, there has not been enough of it.

The executive said, “They are acquiring damage players, and when they don’t do damage, they are below average. And they are kind of all the same.”

So, for the Yankees, either right makes might or they cannot score enough to win the AL East.