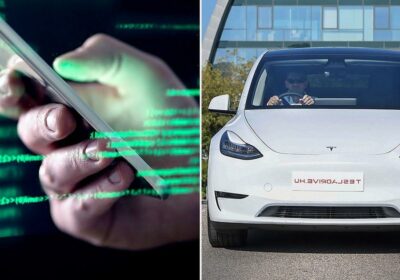 There's no school like the old school—at least where car keys are concerned.

That's one conclusion you could draw from a new study which suggests Elon Musk's pricey Tesla cars are a little too easy to break into.

Security experts have discovered a simple way that thieves could hijack Tesla's 'keyless' security system and make off in the motor without even having to break a window.

Armed with a £300 'radiofrequency identification' device, a thief could easily disrupt the contactless reader in the door of a Tesla Model Y and access the car with ease.

Tesla cars are unlocked using a key fob, a card, or a smartphone. When a driver gets close enough to their vehicle, it can be automatically unlocked.

Security consultant Josep Pi Rodriguez claims that one thief could wait by the vehicle while the other gets close to the driver's phone or card.

The thief by the car uses the £300 device to hijack the NFC reader in the driver's door and then send a signal to their NFC card or phone at a longer range.

iOS 16 is finally here – our guide to features, lock screen, and how to download

They can transmit this to their accomplice over Bluetooth or WiFi. If their accomplice is close enough to the owner's device, the phone will send its response to the gadget, unlock the car, and switch on the engine.

While it could give the thieves access to the car, they would struggle to turn the engine on again once it is off.

Rodriguez told The Verge that Elon Musk's firm will struggle to prevent these kind of attacks.

He said: "To fix this issue is really hard without changing the hardware of the car—in this case the NFC reader and software that's in the vehicle."

What's more, the Tesla owner can track their vehicles through a mobile phone app, meaning thieves can easily be caught.