Home » Technology » £56,000 worth of drones crash into a river during Christmas lights event

£56,000 worth of drones crash into a river during Christmas lights event 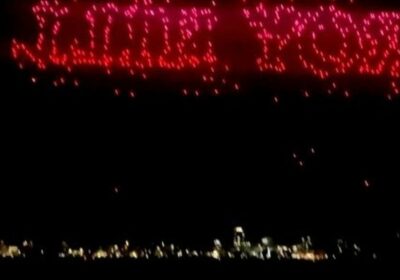 It was supposed to be sci-fi celebration of Christmas. But Perth's annual City of Lights event practically fell apart when fifty drones fell out of the sky and into the nearby Swan River.

The western Australian city had paid for 500 flying drones to put on a dazzling light display in the night sky, with the AI-controlled bots drawing festive images of Santa Claus and other Christmas scenes.

However, what city authorities have called 'technical issues' resulted in £56,000 ($100,000 AUD) worth of drones crashing out of the sky.

READ NEXT: Star Wars-style 'death ray' destroys drone from 2 miles away in first ever test

Perth's lord mayor Basil Zempilas said that, while there was no risk to the public, "some of the drones weren't doing what they were supposed to" and that the show "fell short of expectations".

Josh Van Ross, whose company Drone Sky Shows set up the display, told local news outlet 9News: "This technology is still evolving. I did cry a little bit last night and I try not to think about it."

In an interview with Daily Mail, he added: "If there is any wind interference drones do hit each other, that does happen, propellers snap, there are things that go wrong… two to three drones [falling] per show is actually normal… last night was not."

Spectators at the event were confused by the incident. Local journalist Aleisha Orr tweeted: "Wonder how many drone casualties there were [at] the end of last night's City of Lights drone show. Kids were asking if they were supposed to fall into the water. Still a nice family night out."

Another user, Liz Sheehan, wrote: "Even the drones were bored by the drone show."

Drone art is becoming increasingly popular as an alternative to fireworks. Instead of using explosions, these shows combine hundreds of LED-illuminated drones which are then coordinated using a computer or even AI.