Home » Technology » A Pandemic Lifeline for Restaurants, Delivery Is ‘Here to Stay’

A Pandemic Lifeline for Restaurants, Delivery Is ‘Here to Stay’

As in-person dining returns, home delivery is holding up. For restaurants, services like DoorDash and Uber Eats could become a permanent part of their business.

OAKLAND, Calif. — Last fall, as the weather cooled and coronavirus cases began to rise, May Seto, the owner of Grand Lake Kitchen in Oakland, refurbished a used pizza oven and started a takeout and delivery pizza business out of an extra kitchen where she had cooked for catering and private events.

Now, one of Grand Lake’s two locations serves as a hub for couriers picking up the restaurant’s cafe fare and pizzas. Ms. Seto also has plans to rebuild the entryway at her other location to provide more space for the flocks of delivery drivers picking up food.

“We might rearrange the front of the restaurant a little bit, and keep delivery in mind as if it’s here to stay, because it is,” she said.

Delivery services like DoorDash and Uber Eats became a lifeline for businesses during the pandemic. Restaurants learned the logistics of dealing with them — rearranging kitchens and stockpiling takeout containers in abandoned dining rooms — and reluctantly accepted delivery fees that cut into their already thin profit margins. 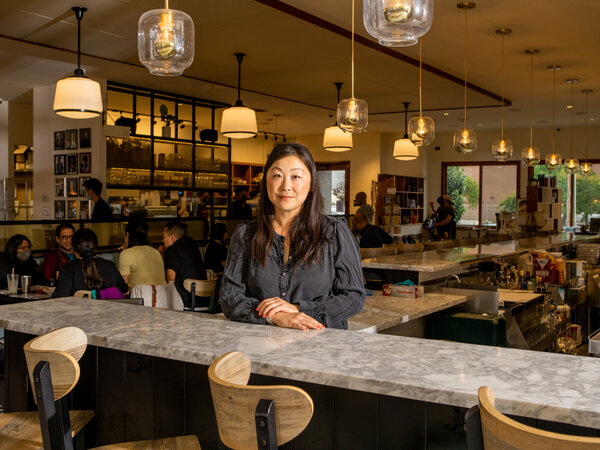 Some of those changes are beginning to look like they may become permanent because consumers aren’t letting go of their newfound fondness for getting food delivered to their front doors. In a recent JD Power and Associates survey, 71 percent of consumers said they would continue to order delivery as much or more than they had during the pandemic.

In markets that reopened earlier than most places, like Florida and Texas, as well as Australia, DoorDash said its order volume slipped about 20 percent from the height of the pandemic. Uber Eats also had dips as communities reopened, but its revenue still grew 230 percent annually in the first quarter of this year — a welcome respite from Uber’s slumping ride-hailing business.

Something similar is happening in places like San Francisco. As lockdown orders eased this spring, Laurie Thomas, the co-owner of two restaurants in the city, said deliveries declined. But as San Francisco began to more fully reopen in June, Ms. Thomas’s DoorDash orders climbed back up, and were just slightly lower than they had been during the pandemic.

“Delivery became a huge part of life during the pandemic,” said Ben Bleiman, the leader of the San Francisco Bar Owner Alliance. “The question is how much of that is here to stay and how much is going to leave.”

There is little question the pandemic was a boon to online delivery services. In the first quarter of the year, DoorDash processed 329 million orders, a quarterly record for the company and a 219 percent increase from the previous year, it said. DoorDash estimated that it would process $9.4 billion to $9.9 billion in orders during the second quarter of the year, after processing $9.9 billion in the first quarter.