Home » AirTags review: Find your keys with ease, but only if you own an iPhone

AirTags review: Find your keys with ease, but only if you own an iPhone 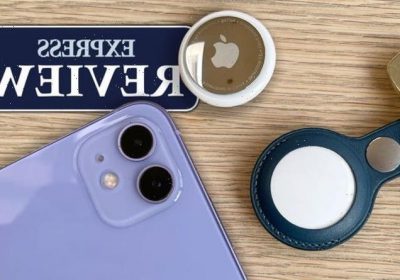 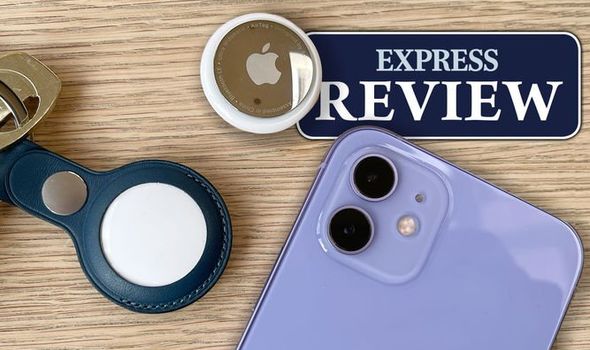 Apple’s new AirTags arrive in stores today. These little £30 puck-shaped gadgets promise to help you find your belongings whenever they go missing inside the house…. or further afield. For anyone who spends countless hours searching for their keys, handbag, or coat this sounds like the ultimate solution, but are the AirTags really any good and can they end the nightmare of losing your possessions?

Express.co.uk has had an AirTag attached to our keys for the past week and so far, so good.

There’s no question this is a highly capable device that impresses the minute you remove it from the packaging. Apple has made the set up so simple that even the biggest technophobe should have no issues getting things up and tracking in minutes.

You simply peel and pull away the plastic cellophane which then instantly breathes life into the tag. A bleep to let you know it’s activated. Hold it next to your iPhone and wait for the pop-up window to appear, which then takes you through the set-up process – from naming the tag and adding any contact details you want to appear should someone find it.

And that’s it. You’re all up and running.

So, what happens if you actually lose your keys or can’t find your bag? 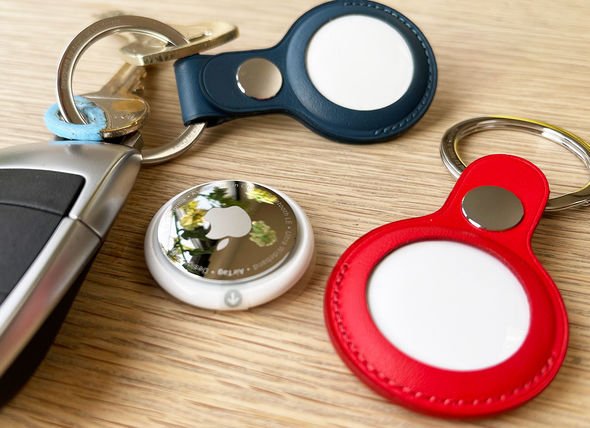 Apple has added a new menu in the Find My app, which now lets you discover lost possessions. For those who don’t remember, Find My is an amalgamation of the Find My Friends and Find My iPhone apps preinstalled on any iPhone. Both features are now found in the single Find My app, as well as any possession you’re tracking using AirTags.

Like with a lost iPhone, the minute you can’t find something you simply launch the application. Tap on the Items menu at the bottom of the screen and you’ll find all of your AirTags’ last known location on an interactive map. As long as the AirTag is nearby you can play a sound via the in-built speaker.

If you’d rather not bother anyone with a loud noise, you can use the very clever Find function which guides you, via interactive arrows, to its exact location. It’s all clever stuff and works really well with arrows pointing you in the right direction and even showing an exact measurement of how far away you are appearing on your iPhone. 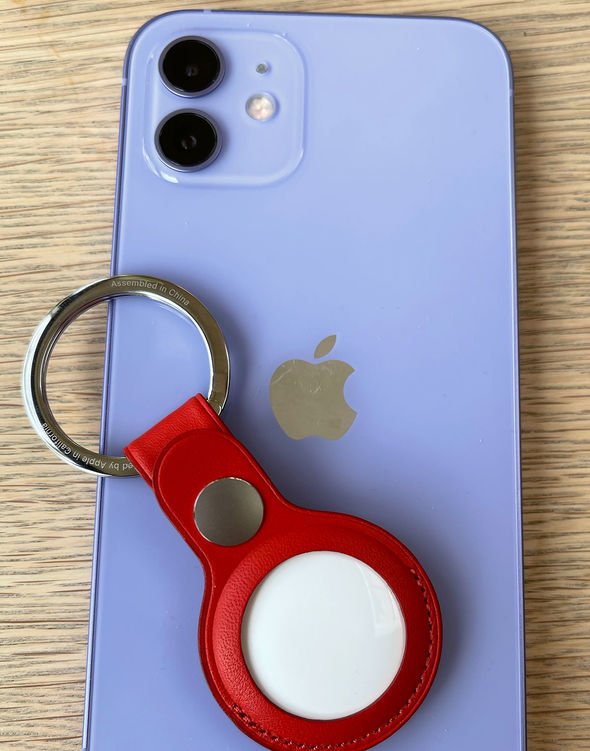 When you move the right way things go green but start heading away from the tag and you’ll get a warning with the iPhone’s display switching to black. Our only slight niggle with this feature is that it struggles with height and can get confused if an AirTag is on the floor above you. So, if you own a four-storey townhouse – or live in an apartment block and left your bag in reception, twelve flights below you – it might take a little longer to discover where you’ve hidden your keys.

It’s also worth noting that to be able to use these guiding arrows on-screen to guide you to a mislaid AirTag, you’ll need an iPhone 11 or iPhone 12. That’s because these newer devices have the Ultra-wide Band sensor tucked inside. If you have an older iPhone, you’ll have to make do with the good ol’ fashioned bleeping sound to find that lost luggage!

Other nice features included with the AirTag are the water-resistant design that can cope with being submerged for 30 minutes and a changeable battery which should mean the AirTag lasts an infinite amount of time.

This is an important addition from Apple as some of its rivals, such as a few of the line-up from Tile, are a sealed unit meaning you have to throw them away once the battery runs out – not great for the environment. 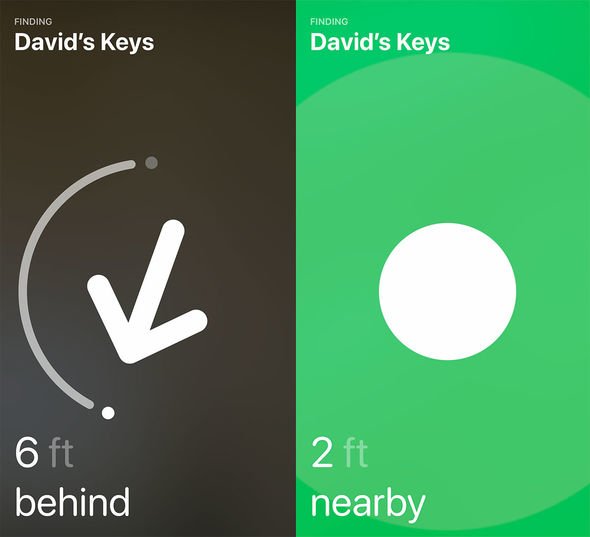 Something else that Apple has thought about is what happens should you leave your keys or bag on a train or bus and they end up miles away from you. This is where the firm’s huge popularity comes into its own.

Apple’s Find My network is approaching a billion Apple devices and can detect Bluetooth signals from a lost AirTag using all of those iPhones in people’s pockets across the globe to relay the location back to its owner, all in the background, anonymously and privately.

Users can also place AirTag into Lost Mode and be notified when it is in range or has been located by a passing iPhone or iPad. If a lost AirTag is spotted by someone, they can tap it using their iPhone or any NFC-capable device and be taken to a website that will display that contact phone number you added during the setup process.

We’re still fully testing this feature and will update this review in the coming days with our thoughts.

One final thing to note is that Apple has made sure the AirTag can’t be used to track someone without their permission. The thought that one of these tags could be popped in a bag and used to monitor a location is pretty scary but there’s a clever way to make sure that never happens.

If an AirTag is separated from its owner, but realises that it’s in close proximity to another iPhone for a prolonged period – even as that iPhone moves around, it will instantly send an alert warning them that an AirTag is in close proximity. That said, it’s not immediately clear what happens if that person owns an Android phone. 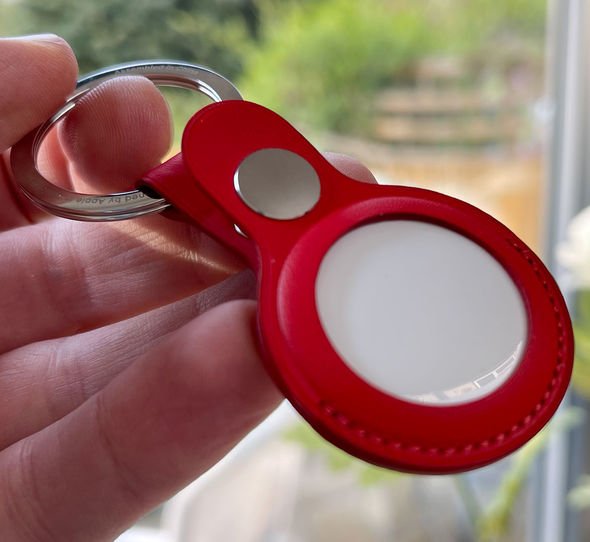 It feels like Apple really has thought of everything with the AirTag and it’s very hard to pick fault with these possession-tracking discs.

If we had one big gripe it would be the fact that Apple doesn’t supply any way of attaching them to your belongings in the box. There’s simply the little silver and white disk and that, we’re afraid, is all you get.

If you want to hook them to your keys or strap one to your bag you’ll need to pay for a pouch with Apple charging at least £20 for the privilege.

We understand why Apple doesn’t ship a case with its iPhone or supply a laptop bag with a MacBook, but the AirTag really is useless without a way of hooking it to your keys. And while you can drop it into the bottom of a rucksack – features like the contact information show that Apple believes the best way to use AirTags is to have them on display, like a luggage tag.

As such, it does hurt a bit that you’re expected to fork out more for something so vital.

Apple’s AirTags are simple to set up and brilliantly easy to use. They offer a great way to track your possessions and the changeable battery means they should last for years.

At just £29 they also seem pretty good value for money although the fact you need to pay extra to hook them to your keys is very annoying.

That said, if you own an iPhone and are constantly losing things, you won’t find a much better way to track them down.