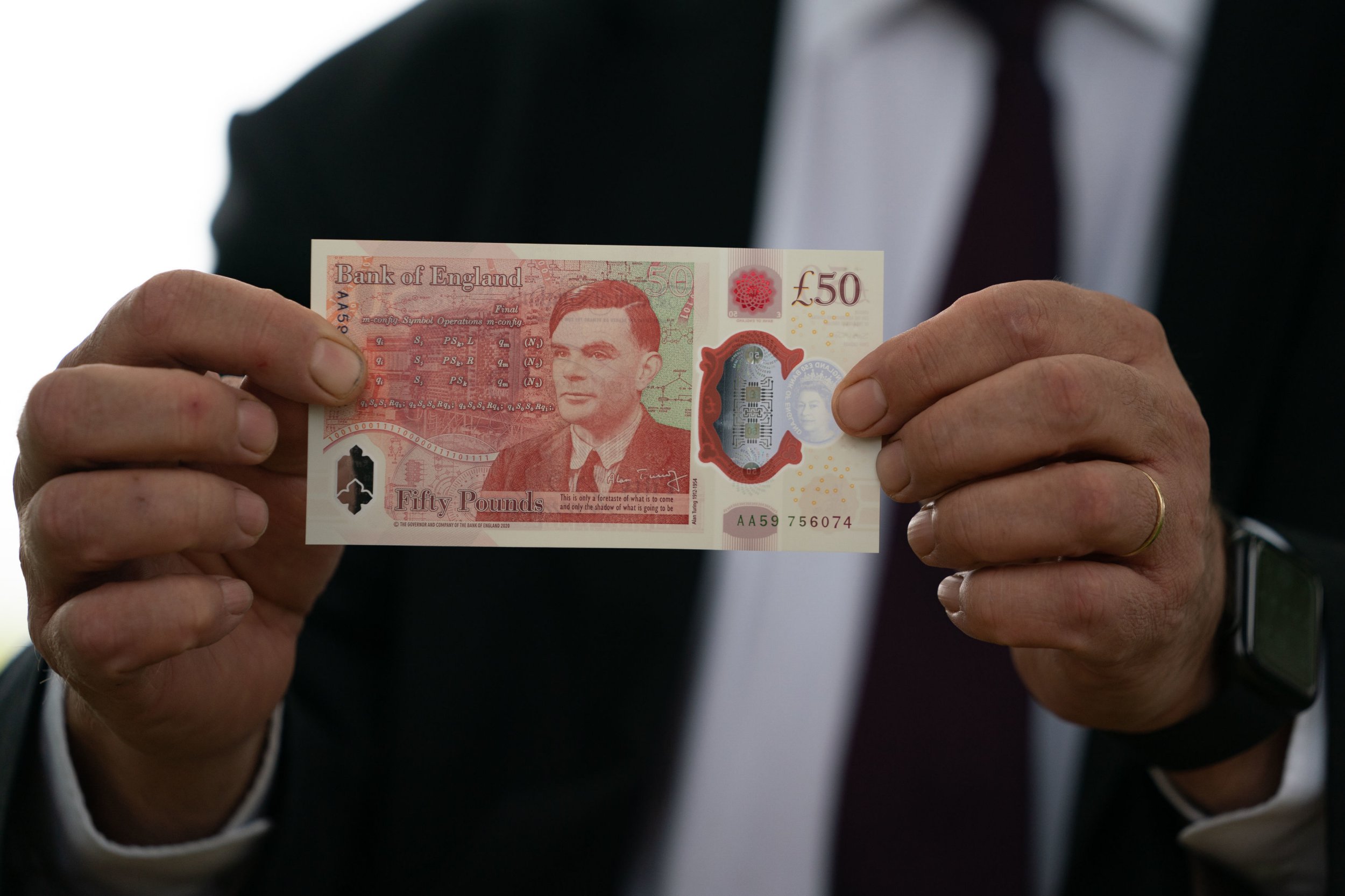 The £50 banknote featuring WW2 codebreaker Alan Turing has begun to enter circulation, 70 years after the British government convicted Turing for being gay.

The new polymer Bank of England note will become available in bank branches and at ATMs from today, coinciding with Turing’s birthday.

Celebrating Turing’s life, the Bank of England was also flying the Progress Pride flag above its building in London’s Threadneedle Street on Wednesday.

Often considered to be the father of computer science, Turing played a pivotal role in breaking the Enigma code and his legacy has had a lasting impact on the way we live today.

Cracking the Enigma code is said to have helped to shorten the Second World War by at least two years – saving millions of lives.

The Enigma enciphering machine, adopted by the German armed forces to send messages securely, was believed to be unbreakable.

Turing was part of an Enigma research section working at Bletchley Park in Buckinghamshire.

The first wartime Enigma messages were cracked in January 1940 and Enigma traffic continued to be broken routinely for the remainder of the war.

Speaking at Bletchley Park, Bank of England Governor Andrew Bailey said: ‘Our banknotes celebrate some of our country’s most important historical figures.

‘That’s why I am delighted that Alan Turing features on the new polymer £50 note.

‘Having undertaken remarkable codebreaking work here at Bletchley Park during the Second World War, he went on to pioneer work on early computers, as well as making some groundbreaking discoveries in the field of developmental biology.

‘He was also gay and was treated appallingly as a result. Placing him on this new banknote is a recognition of his contributions to our society, and a celebration of his remarkable life.’

Instead of the steam engine symbols in honour of pioneer engineers James Watt and Matthew Boulton that appear on the current note, the new note will feature drawings and words to honour Turing’s code breaking prowess.

The note will feature a prominent photo of Turing, taken by Elliott and Fry in 1951, part of the National Gallery’s collection, as well as a maths formulae from Turing’s seminal 1936 paper ‘On computable numbers, with an application to the Entscheidungsproblem’.

It will also include drawings of Turing’s Automatic Computing Engine (ACE) Pilot machine, an early form of computer, and of the British Bombe, a machine invented by Turing to break the German Engima machine.

As well as his signature and ticker tape depicting Turing’s birthday in binary code, the note will feature a quote from Turing that he gave to The Times in 1949, saying ‘This is only a foretaste of what is to come, and only the shadow of what is going to be’.

In addition to these symbolic gestures, the note will also contain a number of security features, like holograms, see-through windows of Bletchley Park and foil patches.

‘This new £50 note completes our set of polymer banknotes,’ said Sarah John, the Bank’s chief cashier whose signature features on the note

‘These are much harder to counterfeit, and with its security features the new £50 is part of our most secure series of banknotes yet.’

Born on June 23 1912, Mr Turing studied mathematics at King’s College, University of Cambridge, gaining a first-class honours degree in 1934. He was elected a Fellow of the College.

In 1936 his work On Computable Numbers is seen as giving birth to the idea of how computers could operate.

His ‘Turing test’ also examined the behaviour necessary for a machine to be considered intelligent – the foundation for artificial intelligence.

The wartime hero’s later life was overshadowed by a conviction for homosexual activity, which was later considered unjust and discriminatory.

Mr Turing was convicted of gross indecency for his relationship with a man. His conviction led to the removal of his security clearance and meant he was no longer able to work for Government Communications Headquarters (GCHQ).

He was chemically castrated following his conviction in 1952 and died in 1954 at the age of 41.

He was later given a posthumous royal pardon.

The new polymer £50 note contains advanced security features, completing what the Bank described as its most secure set of banknotes yet.

The note will join the Sir Winston Churchill £5, the Jane Austen £10 and the JMW Turner £20, meaning all Bank of England banknotes are now available in polymer.

The Bank also said that September 30 2022 will be the last day people can use its paper £20 and £50 notes. After that, the paper notes will no longer be legal tender, so people should spend them or deposit them at their bank beforehand.