Amazon says the new F.T.C. chair, Lina Khan, should recuse herself from investigations. 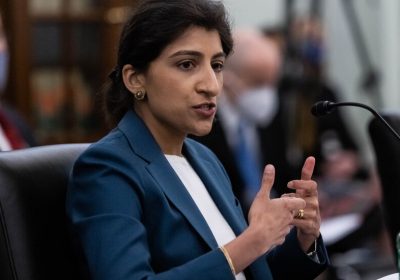 Amazon demanded on Wednesday that the new chair of the Federal Trade Commission, an avowed critic of the company, recuse herself from any antitrust investigation into the e-commerce giant.

The company argued in a 25-page petition to the F.T.C. that the chair, Lina Khan, could not be impartial in antitrust matters involving the company because she had been intensely critical of Amazon as a scholar and writer and because she had worked on the staff of a congressional investigation of the company.

“At a minimum, this record creates the appearance that the F.T.C., under Chair Khan’s leadership, would not be a neutral and impartial evaluator of the evidence developed in any antitrust investigation against Amazon or in deciding whether to bring enforcement actions against the company,” the company said in the filing.

Amazon said Ms. Khan should be recused from “at least all of the current antitrust investigations of Amazon of which the commission has notified Amazon.” The company is the subject of an F.T.C. inquiry, as well as investigations by state attorneys general.

A spokeswoman for the F.T.C., Lindsay Kryzak, declined to comment on the petition.

The petition shows how the major tech companies are trying to defang and discredit efforts by the Biden administration and lawmakers to regulate the industry. They have lobbied against bills that would ban some of their business practices, supported outside advocacy groups that defend their position and hired scores of lawyers to fend off investigations.

President Biden named Ms. Khan chair this month after Congress approved her nomination to a seat on the commission. She has made no secret of her concerns about the country’s biggest tech companies.

She told lawmakers at her April confirmation hearing that she saw a “whole range of potential risks” around the companies and signaled that she intended to try to address those risks while at the agency.

Amazon said that if Ms. Khan played a role in antitrust investigations of Amazon, it would violate federal ethics rules and the firm’s right to due process.

The company attached a statement from Thomas D. Morgan, a George Washington University law professor emeritus, supporting its position. Mr. Morgan said Amazon had paid him to provide his opinion.