Home » Technology » Apple to address iPhone X problem, and give plan to fix it, in results

Apple to address iPhone X problem, and give plan to fix it, in results Apple earnings this week will confirm what most investors have finally accepted: The iPhone X didn't live up to the hype. The results should also provide clues on the company's next strategy for its most important product.

Chief executive Tim Cook and other Apple executives have a "major prove-me" period ahead, beginning with a new sales forecast and a conference call with analysts on this week, GBH Insights analyst Daniel Ives said. He and other analysts cut their iPhone sales estimates, and Apple shares were are down almost 8 per cent in the past two weeks through Friday. 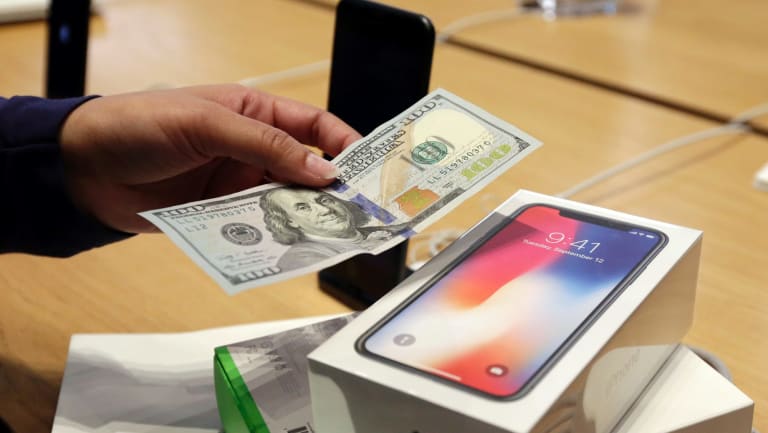 A high starting price has meant the iPhone X has not sold as well as expected.

The stock got a bit of a reprieve on Monday, with RBC analyst Amit Daryanani saying the "magnitude of investor negativity is likely overdone." Investors could also still find reason for optimism in the potential for strong growth from Apple services and an upgrade to the company's capital return program. Morgan Stanley said it expects Apple to hike the program by $US150 billion ($199 billion) to a cumulative total of $US450 billion by 2020 and increase its quarterly dividend to 94.5 US cents a share from 63 US cents.

Recent concerns about Apple's iPhone business were fanned by suppliers that reported weak demand for high-end handsets, another sign the smartphone boom that made Apple the most-valuable company is ebbing. It's also under pressure in China, where some consumers are shunning pricey iPhones and local rivals like Oppo and Vivo are grabbing market share.

This week, Apple is expected to report fiscal second-quarter iPhone unit sales grew just over 2 per cent from a year earlier. For the fiscal third quarter, unit sales will be down 5 per cent year-over-year, according to average analyst forecasts compiled by Bloomberg.

Expectations were higher when Apple launched new phones late last year. However, the iPhone 8 and 8 Plus looked similar to the iPhone 6 and 6 Plus models from about three years earlier. The iPhone X had a bright, edge-to-edge display and 3-D facial recognition, but the high starting price ($1579 in Australia) was too much for some consumers.

That left a hole in the market for a breakthrough iPhone close to the previous price; and Apple is already working on filling this demand. The company is preparing a new lower-cost iPhone that looks similar to the iPhone X and has some of its most-appealing features, it was reported earlier this year.

"That lower-priced iPhone X, essentially, should be a successful product. That launch itself could move iPhone sales up 5 per cent a year," said Gene Munster, co-founder of Loup Ventures and a longtime Apple analyst. Still, he warned that the days of 15 per cent annual iPhone growth are over.

When the X launched last year, Apple paid handsomely for the new Face ID system, stainless steel casing and sharper, more efficient OLED screen technology. The iPhone X's parts cost $US115 more than the iPhone 8's, according to a November analysis. That made it difficult to price the product in line with previous iPhones, without slicing Apple's legendary profitability.

The new, lower-cost iPhone will use an LCD display that's about half the cost of the OLED screen in the iPhone X. It's also likely to use an aluminum casing versus stainless steel. That could bring the price close to the level that's proven successful for many years.

In addition, Apple will launch a giant iPhone with a 6.5-inch screen and an update to the current iPhone X size, people familiar with the matter said earlier this year.

While results this week will likely show slower Apple growth, this broader iPhone strategy could revive sales when the new devices come out toward the end of 2018.

For most companies, one product facing growth headwinds wouldn't be a concern. For Apple, the iPhone generates about two-thirds of sales, and the other third comes mostly from products and services best used with an iPhone. Here are some of the key numbers to watch this week:

Bernstein analyst Toni Sacconaghi said weakness in the current iPhone lineup was caused by a structural slowdown in the growth of new customers and the high pricing of the X model. A saturated smartphone market means Apple can't do much about the first problem, but its pricing strategy can vary depending on the specific iPhones being offered.

"The rumoured lineup could quickly change, and pricing remains a wild card; Apple appears to have somewhat mis-estimated price elasticity this time around, but what might they change going forward?" Sacconaghi wrote in a recent note to investors.