Apple is facing multiple challenges to its tight control of games and related revenue on its App Store, with its latest public tussle resulting in the incredibly popular game Fortnite being removed from its digital storefront altogether.

Epic Games, the company behind the megahit battle royale game which brought in revenues of $US1.8 billion ($2.5 billion) in 2019, has long complained about the 30 per cent cut mobile operators Apple and Google take from purchases made inside the game. This week it announced a permanent 20 per cent drop in prices across its store, but mobile players could only enjoy the savings if they circumvented Apple and Google and bought directly from Epic. 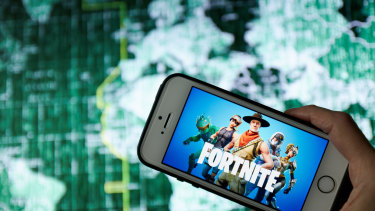 Apple has removed Fortnite from the App Store after its creator sought to circumvent Apple’s payment systems.Credit:Alamy

Apple declared this a violation of its terms, and removed the game from the App Store.

"Epic Games took the unfortunate step of violating the App Store guidelines that are applied equally to every developer and designed to keep the store safe for our users," Apple said in a statement.

"Epic enabled a feature in its app which was not reviewed or approved by Apple, and they did so with the express intent of violating the App Store guidelines regarding in-app payments."

Epic has responded by suing Apple in California, citing anti-competitive behaviour in a legal complaint that reads like an essay arguing the iPhone-maker's practices have become increasingly monopolistic.

"Apple has become what it once railed against: the behemoth seeking to control markets, block competition, and stifle innovation," it reads in part.

"Apple’s removal of Fortnite is yet another example of Apple flexing its enormous power in order to impose unreasonable restraints and unlawfully maintain its 100 per cent monopoly over the iOS In-App Payment Processing Market."

Epic is also encouraging players to complain to Apple about the ban.

This is not the first time Epic has made a public campaign of resisting platform fees and charges. In 2008 it launched Fortnite on Android devices but sidestepped Google’s Play Store, asking users to ignore Google's security warnings and "sideload" the app.

Epic reluctantly added Fortnite to the Play Store earlier this year, but Google has today removed it for violating its in-app purchasing terms. However Google allows alternative storefronts on Android, so users can still access the game via Epic's own app or website, and via the Samsung Galaxy Store.

Apple said it will make every effort to work with Epic to have Fortnite reinstated on its store.

The drama comes a week after public tensions between Apple and another tech giant, when Microsoft's anticipated game streaming app was blocked at the eleventh hour. In many countries around the world (though not Australia, yet), Microsoft is preparing to add a cloud element to its Game Pass service, which will let subscribers access hundreds of games not only through consoles and PCs but streaming to phones for a monthly fee.

Apple determined the service violated its terms, saying in a statement that games services on the App Store needed to submit each individual game for review by Apple.

Microsoft said it will now focus on bringing Game Pass streaming to Android.

"Apple stands alone as the only general purpose platform to deny consumers from cloud gaming and game subscription services," the software giant said.

"And it consistently treats gaming apps differently, applying more lenient rules to non-gaming apps even when they include interactive content."

This may be a reference to apps like Netflix, which allow users to pay the service provider directly and give access to content that is not vetted by Apple or listed separately on its store.

At the time of the Microsoft block, Epic CEO Tim Sweeney foreshadowed Fortnite's move by criticising Apple on Twitter.

Google's Stadia streaming service, which works similarly to Microsoft's, is also not available in the App Store.