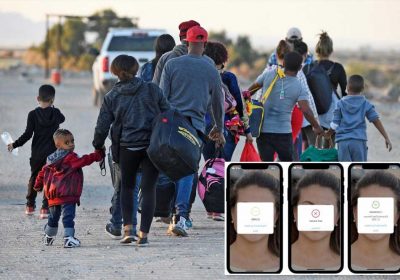 The Biden administration is embracing controversial facial recognition technology and other intrusive surveillance tools to process the backlog of thousands of migrants at the US-Mexico border, according to a report.

US Customs and Border Protection has distributed an app called “CBP One” that uses facial recognition technology to compare photos of migrants with various refugee databases, the Los Angeles Times reported Friday.

In addition to tracking faces, the app uses geolocation and cloud technology to create databases of personal data that can be accessed by other law enforcement agencies and stored for up to 75 years, the paper said based on CBP legal disclosures and interviews with privacy analysts.

The “smart border” technology is more effective at screening and admitting migrants than Trump-era policies like walls and travel bans, the Biden administration argues.

But civil liberties and privacy experts sounded alarms about the amount of data the app collects.

“CBP’s use of face recognition poses enormous risks to privacy and is another step down a dangerous path,” American Civil Liberties Union senior national security attorney Ashley Gorski told the paper. “Whenever the government acquires a person’s faceprint, it creates a risk of persistent surveillance, where the government could identify and track people’s movements without their knowledge.”

International organizations including the United Nations refugee office have reportedly agreed to use the CBP One app. These organizations reportedly use the app to identify migrants seeking asylum who were forced to remain in Mexico under Trump administration policies. The organizations submit migrants’ personal data — including photographs and biometric information — to CBP, which then uses facial recognition to verify the information, the Times reported.

Despite the privacy concerns raised by the ACLU, a CBP spokesperson told the Times that the agency is “committed to protecting all sensitive information in its possession.”

The Department of Homeland Security and the United Nations refugee office did not immediately respond to requests for comment.