Home » Technology » Bridging the gap between tablet and laptop

Bridging the gap between tablet and laptop With the upcoming release of iPadOS — a dedicated variant of iOS tailored for the iPad’s bigger screen — on September 30, software on the iPad Pro will finally live up to the power of the hardware. But for many users, the iPad can never be a true laptop replacement if the keyboard doesn’t feel right.

Apple’s Smart Keyboard is designed to be as light and thin as possible, while still providing a full size keyboard to type on. That leaves room in the market for more "professional" keyboards, and the Brydge Keyboard fills the gap nicely. 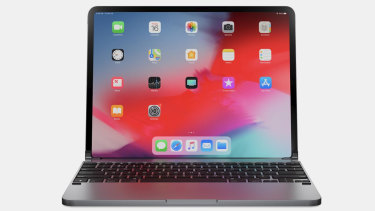 Paired with a Brydge keyboard, the 11 inch iPad Pro looks like a tiny Mac.

It is a single slab of aluminum, with large, comfortable backlit keys that provide just the right amount of travel and springiness.

Brydge makes keyboards for virtually all iPads, as wells as Windows and Chrome OS devices, and when paired with the 11 inch Pad Pro — the iPad that for me hits the sweet spot of portability and productivity — the Brydge even resembles an adorably small MacBook Pro. It looks so much like an official Apple product it caused a few double takes in meetings over the last few weeks.

Beyond looks, the Brydge is the most comfortable and fully featured keyboard designed for the iPad I’ve ever tried, and I’ve tried them all, from Apple’s official keyboards to Apple approved solutions from Logitech and countless no name keyboards over the years.

When crafting long emails, or even this review, the Brydge felt just like using the keyboard on an older MacBook Pro, before this current scissor key generation. The keys felt a little cramped for the first few days on the 11 inch model, after being so used to the 13 inch layout of my laptop. If I was constantly switching between the two sizes, I would no doubt find myself making mistakes on each keyboard, because they feel so similar, but I stuck to using just an iPad for the last two weeks of this review period. Eventually, my hands corrected to the Brydge, and moving back to a MacBook was challenging.

The Brydge has a top row of function keys that include a home button, media controls, and brightness keys for the iPad and the keyboard’s backlight. This meant I was reaching for the iPad screen even less than usual, which made me wish the Brydge had a built in trackpad, as iPadOS will support one. One small issue; the thickness of the keyboard makes swiping on the home bar, something you do constantly in iOS these days, a little difficult.

Overall, I loved using the Brydge, but it’s not for me. If you want an iPad that looks and feels as much like a laptop as possible, the Brydge will accomplish that. But it will bring laptop weight to the device, which sort of defeats the purpose of the iPad.