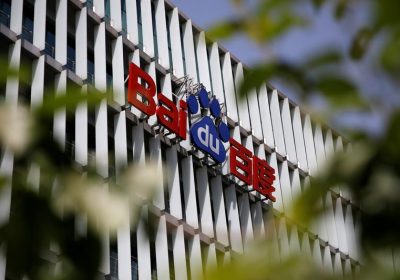 HONG KONG (Reuters) – Baidu made a tepid debut in its Hong Kong secondary stock listing on Tuesday, bucking a trend of first-day pops on the bourse, as investors were wary of a fundraising flurry in the city and questioned the search company’s growth plans.

FILE PHOTO: The logo of Chinese search engine leader Baidu is seen at the company’s headquarters in Beijing, China May 18, 2020. REUTERS/Tingshu Wang/File Photo

The sombre investor mood towards Chinese technology offerings was reinforced with video site Bilibili BILI.O raising a less-than-expected $2.6 billion in its secondary listing.

Baidu shares traded at HK$252.80 by midday, virtually flat compared to the $HK252 price set for its listing in Hong Kong which raised $3.1 billion.

The lacklustre debut compared with some of the city’s other major first-day movers in 2021, like Kuaishou Technology 1024.HK which gained 160% in early February.

Hong Kong has seen $31.4 billion raised through share sales so far this year, compared to $8.6 billion over the same period last year, prompting concerns that appetite to buy new deals could be weakening.

“There is too much paper around, the listings have been never ending and companies have raised money so easily without any real need,” said one Hong Kong fund manager who could not be named as he was not authorised to speak to media.

“The ones coming back to Hong Kong make sense, but a lot don’t make sense.”

Baidu’s tame Hong Kong start comes even as its New York listed stock rose 3.4% on Monday and is up 23% since the start of the year. Hong Kong’s Hang Seng index .HSI was down 1.2% on Tuesday.

Baidu chairman and CEO Robin Li said the secondary listing was a homecoming for the company.

“When Baidu got listed in Nasdaq…I said Nasdaq was only one of our stops. Baidu would come back to China eventually, because China is our root. Today, Baidu finally came back home,” he told a ceremony in Beijing.

“The market is betting too much on Baidu’s new businesses … patient investors want to see some vehicle related sales in the second quarter results,” said Lu who publishes on the Smartkarma research platform.

Baidu’s deal was 112 times oversubscribed by retail investors while the institutional book was covered 10 times, according to the company’s filings with the city’s exchange.

Bilibili finalised its secondary listing on Tuesday, raising a smaller sum than the company’s initial target of about $3 billion.