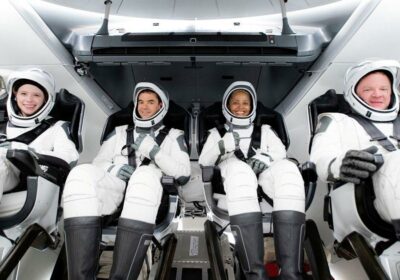 Three ordinary people and a billionaire are currently floating 360 miles above our heads, after the world's first all-civilian spaceflight blasted off this morning.

SpaceX has shared some incredible footage of the Earth from its Dragon spacecraft, which is currently orbiting our planet at a higher altitude than the International Space Station and the Hubble Space Telescope.

It took off from the Kennedy Space Center in Florida, the US.

The crew includes a cancer survivor, a professor, an artist, along with wealthy tech mogul Jared Isaacman who funded the Inspiration4 mission.

The trip is set to raise around £200 million for cancer treatment and other diseases at a children's hospital in Tennessee.

After five months of gruelling training, the crew will spend three days in Earth's orbit conducting scientific experiments in microgravity as they soar around the globe at 17,000 miles per hour.

Hopefully they won't get lonely as there are no pilots onboard – the entire trip is being steered by scientists down on the ground.

The crew could also be in for a bumpy landing, as the capsule must splash down off the coast of Florida.

People took to Twitter to congratulate the new astronauts – and thank them for a great view of the rocket.

"Was able to see the launch from the cruise ship I'm on in the Bahamas", one Twitter user said.

"It was beautiful. Godspeed to the entire crew!"

Some queried how comfortable the crew are going to be.

Another asked: "Will they be stuck in their seats in their groundskeeper suits the entire time or can they unbuckle and move around?.

To keep up to date with all the latest news stories, make sure you sign up to one of our newsletters here.

The first all-civilian SpaceX flight is one small step for man, but one giant leap for Elon Musk's ambitious space tourism plans.

It's unclear how much tickets to space will cost in future.

However, space tourism firm Axiom plans to fly three people in the same capsule to the International Space Station next year for $55 million a seat.