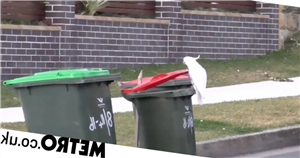 Clever cockatoos learn from each other how to open rubbish bins put out by residents in Australia, according to new research.

And the technique is catching on with peers working out how it’s done – by watching, say scientists.

Sulphur-crested cockatoos that call the Sydney suburbs have a knack for getting into garbage.

People have had to come up with inventive devices to keep them out – leading to a bird-brained ‘arms race’.

Lead author Dr Barbara Klump, a behavioural ecologist at the Max Planck Institute of Animal Behaviour, said: ‘When I first saw a video of the cockatoos opening the bins I thought it was such an interesting and unique behaviour and I knew we needed to look into it.’

Impressed by their ingenuity, the German researchers studied how many had picked up the trick.

The team documented the phenomenon in three suburbs – and found that it had spread to a further 44 suburbs.

Cockatoos are a type of parrot renowned or their intelligence. Tests have shown they are smarter than human toddlers.

After analysing videos of 160 of the clever birds lifting bin lids, and, by assessing the geographic spread, Dr Klump and colleagues realised most learn by watching others.

It is quite a feat of skill for the birds, who must grasp a bin lid their beaks and pry it open.

Then they have to shuffle far enough along the bin’s edge that the lid falls backwards – revealing edible treasures inside. The cockatoos’ motivation is food waste.

Dr Klump said: ‘They really like bread. Once one gets a bin open all the cockatoos in the vicinity will come and try to get something nice to eat.’

The birds typically prise the bins open with their beaks and then manouevre themselves onto a small rim and flip the lid open. It’s a community affair.

Dr Klump said: ‘We could actually show this is a cultural trait. The cockatoos learn the behaviour from observing other cockatoos and within each group they sort of have their own special technique, so across a wide geographic range the techniques are more dissimilar.’

On one single rubbish collection day they filmed around 160 successful efforts by the birds.

Most of them were males, which tend to be larger than females and also likely to be dominant in social hierarchies.

Dr Klump said: ‘This suggests if you’re more socially connected, you have more opportunities to observe and acquire new behaviour – and also to spread it.’

Locals can’t simply secure the bin lids completely closed because the lids need to open when tipped by an automated arm on the garbage truck.

A survey by the team found people put bricks and stones on their bin lids and strap water bottles to the top.

They also rig ropes to prevent the lid from flipping, use sticks to block the hinges – and switch tactics once the cockatoos figure them out.

‘People come up with new protection methods on their own, but a lot of people actually learn it from their neighbours or people on their street, so they get their inspiration from someone else.’

Dr Klump won’t say who she expects to win the race for control of the bins. But the researchers plan to look at how the cockatoos’ behaviour varies from season to season.

She expects we will see more of these kinds of human-wildlife interactions in the future.

Dr Klump added: ‘As cities expand, we will have more interactions with wildlife. I’m hoping there will be a better understanding and more tolerance for the animals that we share our lives with.’

Scientists have documented other examples of social learning in birds, such as blue tits that learned to puncture foil lids of milk bottles in the UK, starting in the 1920s.

Cockatoos are extremely gregarious birds that forage in small groups, roost in large ones, and are rarely seen alone.

While many animals have declined with the expansion of Australian cities, these bold and flamboyant birds have generally thrived.

The study, published in the journal Current Biology, adds to their reputation. Cockatoos are one of the highly demanded pets in the world due to their characteristics.

Cockatoos can memorise human speech – and are able to listen and give responses to their owners. They can perform many tricks – and do a dance.