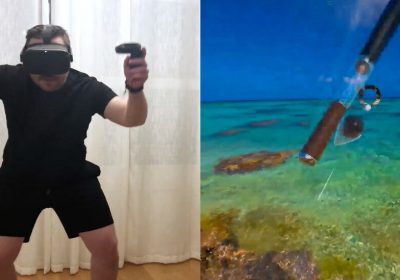 The workouts are real, even if the impossibly beautiful scenery is not. 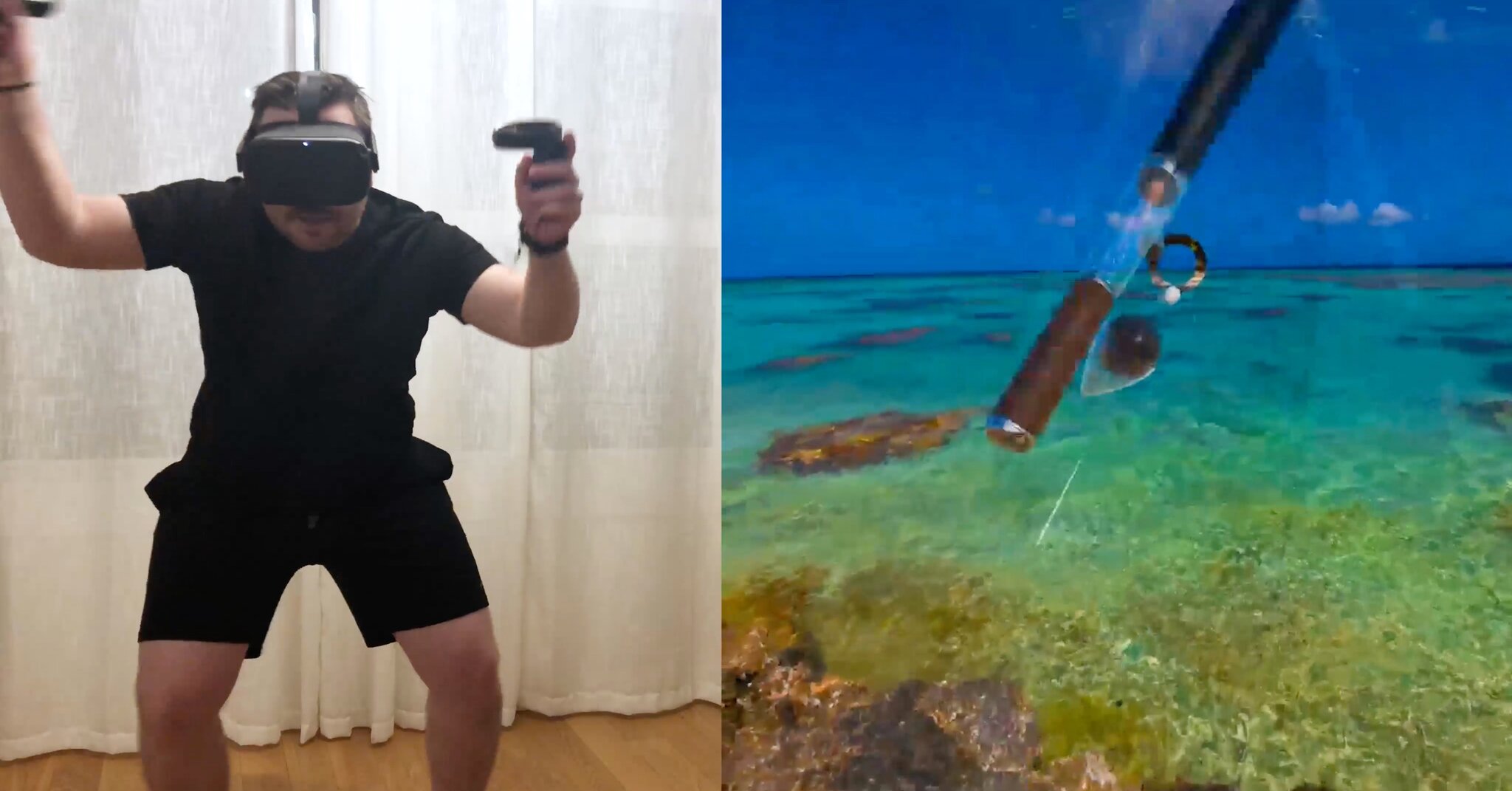 This year has created a lot of reluctant converts. Months ago, in less dire circumstances, we swore we’d never do any number of strange-sounding things: attend Zoom weddings, embrace ring lights, feed a sourdough starter. And yet here we are, making do.

Which is how I ended up spending the last few months using — and getting mildly addicted to — a virtual reality fitness app called Supernatural.

Fitness and V.R. might seem like an unlikely pair. And I was skeptical at first. (Isn’t the entire point of V.R. that you can explore far-flung places and bend the laws of physics without leaving your sofa?)

But when I heard that people were working out in V.R., I decided to try it. I was missing the gym, my go-to YouTube workouts were getting stale, and a Peloton seemed destined to end up as an expensive coat rack. So I got out my Oculus Quest, downloaded Supernatural and got to work.

There are several V.R. fitness apps on the market, but Supernatural is the flashiest and most advanced of the bunch. It costs $19 a month after the first month, making it more like a budget gym membership than a piece of workout equipment. But it delivers for the price. It has become my primary form of exercise, and it has helped me stay sane and active even while we’re cooped up at home.

Supernatural, which was developed by the V.R. studio Within, works a bit like Beat Saber, a popular V.R. game. As with Beat Saber, you play by hitting a series of objects as they fly toward you in time with music. Supernatural’s black and white orbs tell you which hand to hit them with, and flying triangles force you to squat and lunge to get out of their way. At the end of each workout, you’re given a score, with points for accuracy and power.

To answer the first question everyone asks: Yes, it’s a real workout. Most Supernatural sessions are 10 to 20 minutes long and are labeled light, moderate or hard. (They’re not kidding about the hard: An extra-long post-Thanksgiving workout left me so sore I could barely stand up the next day.) I end most of my workouts drenched in sweat — a hazard when you’re working with pricey electronics, and a common enough experience that Supernatural users can order a free silicone sweat guard to attach to their headsets.

I’m generally skeptical that V.R. is going to be a popular, mass-market technology. Most people seem to prefer their entertainment in two dimensions, and I’ve never found that V.R. games and social apps live up to the hype. But V.R. fitness does.

The best thing about Supernatural is the coaches who lead each workout. They’re cut from the same peppy, affirming cloth as SoulCycle and Peloton instructors, and they make it possible to briefly forget that you’re working out alone in your house rather than in a crowded studio. Another plus is that every Supernatural workout takes place in some impossibly beautiful landscape — I’ve batted orbs inside an Ethiopian volcano, next to a placid mountain lake in Patagonia and on top of the Great Wall of China. As a bonus, the company has paid dearly to license Top 40 hits, so users can work out to Lizzo and Kendrick Lamar instead of the bargain-bin dance music you find on other workout apps. 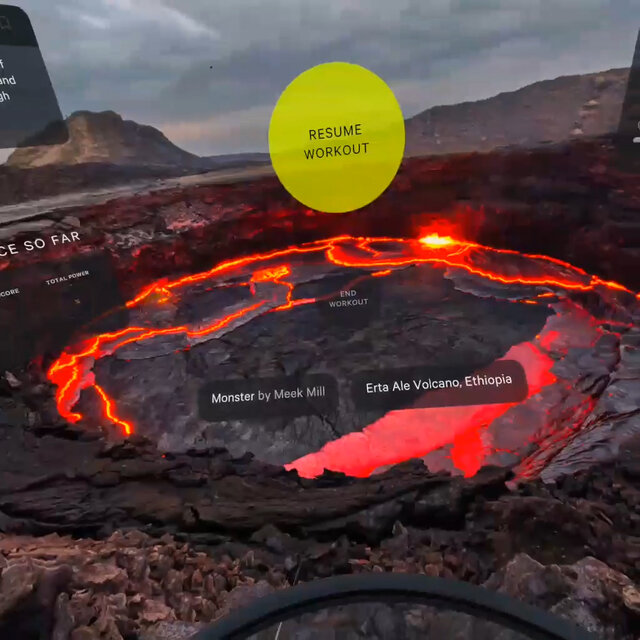 Unlike Peloton and its imitators, Supernatural has no live element. Classes are recorded, and though you can compare your stats with your friends on a leader board, you can’t compete with them in real time. The company recently added guided meditations to its offerings, and it says it’s planning to add more types of classes and community features.

Supernatural was built before the pandemic but has hit its stride during the last few months, as more people look for at-home gym alternatives. (The company wouldn’t say exactly how many subscribers it had, but Chris Milk, Within’s chief executive, told me it was in the five figures.) The official Supernatural Facebook page is full of avid fans, including many who don’t fit the stereotypical image of a V.R.-obsessed gamer.

Mr. Milk, who has produced virtual reality content for The New York Times Magazine, said the difference between Supernatural and other kinds of at-home fitness is that it feels like a game rather than exercise.

“The fundamental flaw of most fitness systems is that, at your core, you’re doing something that is not fun, whether it’s pedaling on a stationary bike or running on a treadmill,” he said. “We use the tool of V.R. to transport you beyond the walls of your apartment and give you an activity that is intrinsically fun to do.”

One downside of Supernatural, beyond the monthly subscription cost, is that it’s compatible only with the Oculus Quest and Quest 2 headsets at the moment. Those headsets are not cheap (base-level models of the Oculus Quest 2 start at $299), and they’ve been in low supply this year. Another downside for the privacy-conscious: Oculus is owned by Facebook, which recently sparked a furor in V.R. world by requiring Oculus users to log in using their Facebook accounts.

The other drawback of Supernatural is that — how to put this delicately? — you look like a huge dork doing it. I feel this pain more acutely than most. I don’t have a room in my house that is big and unobstructed enough to swing my arms safely, so I often work out outside on my patio. My wife has learned to tolerate it, but I pity my neighbors, who have no doubt noticed the strange, sweaty man furiously squatting, lunging and waving his arms while Skrillex blares from the box on his head.

But if you can ignore the funny looks, you might want to give V.R. workouts a try. They’re cheaper than a Peloton, more fun than a YouTube workout and healthier than binge-watching “The Crown.” Even if it doesn’t quite scratch the gym itch, it’s a good-enough alternative until a vaccine makes it safe to heavy-breathe in public again.