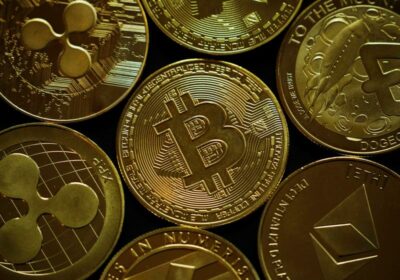 LONDON (Reuters) -A collapse in cryptocurrencies is a “plausible scenario” and rules are needed to regulate the fast-growing sector as a “matter of urgency”, Bank of England Deputy Governor Jon Cunliffe said on Wednesday.

FILE PHOTO: A representation of the virtual cryptocurrency Bitcoin is seen in this picture illustration taken June 14, 2021. REUTERS/Edgar Su/Illustration

Risks to financial stability from the application of crypto technologies are currently limited, but there are a number of “very good reasons” to think that this might not be the case for very much longer, Cunliffe said.

“Regulators internationally and in many jurisdictions have begun the work. It needs to be pursued as a matter of urgency,” Cunliffe said in a speech to the SIBOS conference.

Largely unregulated cryptoassets have grown by 200% so far this year, from just under $800 billion to $2.3 trillion, with 95% of them, including bitcoin, unbacked by any asset or fiat currency, Cunliffe said.

“But as the financial crisis showed us, you don’t have to account for a large proportion of the financial sector to trigger financial stability problems – sub-prime was valued at around $1.2 trillion in 2008,” Cunliffe said, referring to a corner of the U.S. mortgage market whose collapse led to a global banking crisis.

“Such a collapse is certainly a plausible scenario, given the lack of intrinsic value and consequent price volatility, the probability of contagion between cryptoassets, the cyber and operational vulnerabilities, and of course, the power of herd behaviour,” Cunliffe said.

Unregulated, decentralised finance or DeFi, which delivers financial services like credit on the technology that underpins cryptocurrencies, presents “pronounced” challenges given the absence of investor protection and the BoE has begun work on how such risks can be managed, he added.

Last week, global regulators proposed that the safeguards they apply to systemic clearing houses and payment systems should also be applied to stablecoins, a type of cryptocurrency typically backed by an asset or fiat currency, but they only make up 5% of cryptoassets.

Cunliffe, who helped to lead the work on the safeguards, said it took two years to draft this measure, during which stablecoins have grown 16-fold.

“Indeed, bringing the crypto world effectively within the regulatory perimeter will help ensure that the potentially very large benefits of the application of this technology to finance can flourish in a sustainable way,” he added.