An outstanding achievement in 2D action platforming, Tropical Freeze is one of the very best examples of its genre, even when stacked up against Nintendo stablemate Super Mario. Originally released in 2014 and subsequently trapped on the ill-fated Wii U system, the game is getting a second shot on the wildly successful Switch. It's every bit as excellent now as it was then, even if attempts to curb its notorious difficulty for this new version aren't completely smooth.

Having been kicked out of their home of DK Island by a band of frosty, mystical vikings, Donkey Kong and pals travel through a gorgeous and incredibly diverse archipelago, throwing barrels and collecting bananas as they go. 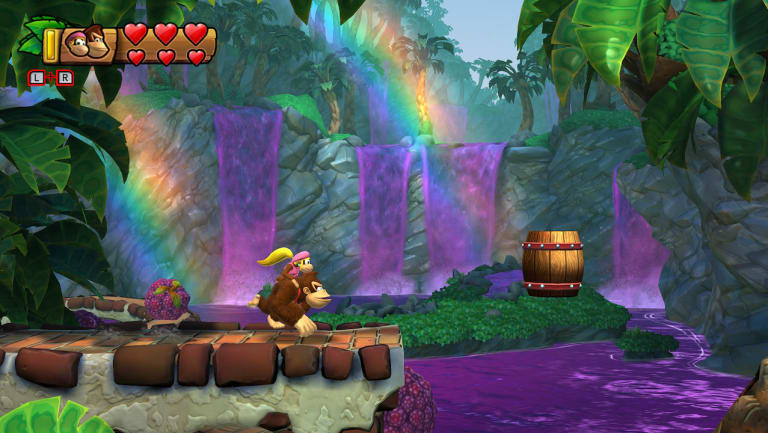 DK and friends are back and looking better than ever.

The key to the Tropical Freeze's success is the amazing amount of polish applied to every aspect. Levels are ingeniously designed to be challenging but learnable, filled with nooks and crannies that grant hidden collectibles and other secrets.

Just running through the stages is a joy as DK has a tremendous sense of weight to his jumps and rolls, balancing tight control with the ability to bop and swing across enemies and vines at speed. The animation on display — not just for the main characters but for the charmingly dopey array of nordic bad guys and even the backgrounds — is top notch.

Cracking certain barrels adds friends Dixie, Diddy or Cranky to the mix, adding the ability to jump higher, further or onto deadly spikes respectively. A second player can optionally take control of these allied apes, but co-ordination is a must to get through the tougher challenges. Unlike the New Super Mario games you won't find yourself jumping into each other's feet accidentally here, but the choice of which ally to choose for which stage, and knowing when to jump onto DK's back to combine abilities, is vital.

In many ways Tropical Freeze brings to mind the original Super Nintendo Donkey Kong Country games, but elevated in almost every aspect. Each world brings a new overarching theme, but every single level brings fresh ideas or new twists on familiar concepts to the table, shifting the gameplay and visuals in exhilarating ways.

There's an underwater escape from a giant octopus, a precarious trip through a sprawling fruit-mincing plant, subversive takes on the classic mine-cart tracks and of course a procession of epic boss battles, featuring personality-filled nemeses that demand grit and memorisation to overcome. Plus, it's all backed by tight 3D camerawork and a brilliant original score by David Wise, composer of the 90s games. 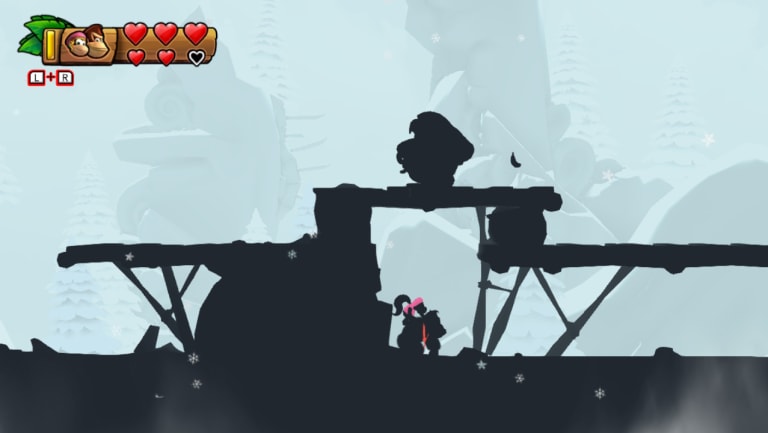 A handful of stages switch things up by plunging the foreground into darkness.

And while certain other games in the Donkey Kong series have gone a bit crazy with the collectibles, it's done absolutely right here. Tropical Freeze is rewarding and a lot of fun to simply play through, but completionists will spend hours hunting for totally optional jigsaw pieces to unlock concept art, and K-O-N-G letters to open up secret paths. There are also hidden temple stages to uncover and master, and further secrets I won't spoil here.

The game looks cleaner than ever thanks to a full 1080p presentation on the big screen (compared to the Wii U's 720p), and the loading screens here are heaps quicker. Of course the ability to play in handheld mode makes a huge difference, and I found the brief levels and high degree of replayability made it perfect for the commute. Regardless of which screen you're on, everything's silky smooth at a rock solid 60 frames per second. 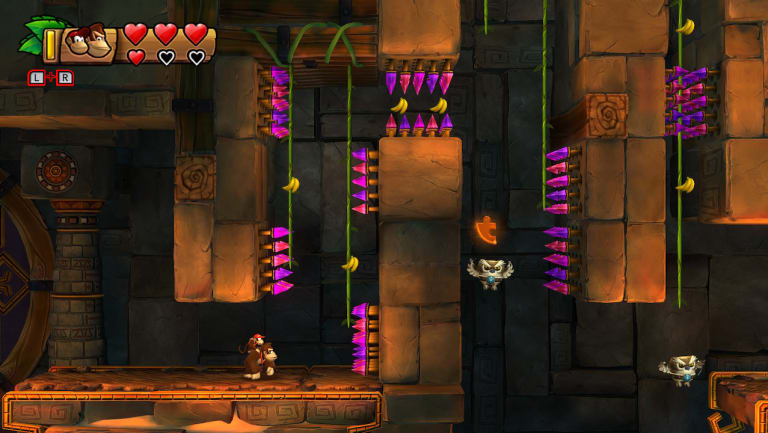 The challenging game gets even tougher in the optional hidden stages.

An optional 'Funky mode', new to the Switch version, gives you extra health and adds a range of subtle tweaks designed to ease the difficulty and keep you from having to repeat the same stages too many times. Yet while the mode is certainly a good idea, and gives you the chance to play any stage as the Kongs' unsettling, Randy-Savage-lookalike cousin Funky, I have mixed feelings about it.

The coolest Kong combines all the special abilities of DK and the three ally characters thanks to his floating, double-jumping, spike-resistant surfboard, meaning you always have all the tools to fully complete every stage. He can also roll infinitely and breathe underwater. Yet I immediately didn't like playing as Funky Kong.

His hover jump — unlike Diddy's — kills your momentum, the game loses some charm without an ally for DK to work with and Funky just kind of feels like cheating in some areas. I played through the entire game in Funky mode, but opted to do so as Donkey Kong and pals to maintain the original feel. I stopped caring about the purity of the experience, however, once I got to some of the incredibly brutal temple stages. Here Funky's slow, steady hover and double jump gave me the ability to just scrape through, proving his worth as an easier-to-play character. 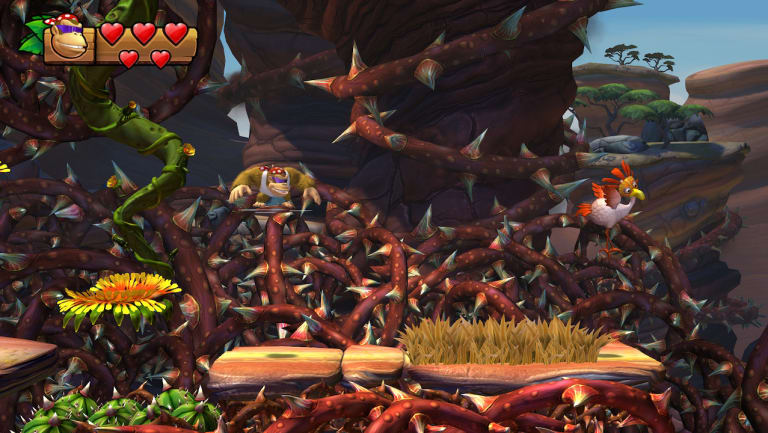 Funky is a totally optional character who will help people get through challenges they otherwise couldn't manage, and that's great. But I wish you could just play as him in the regular game. Once you commit to Funky mode, the experience changes in several other ways, including making K-O-N-G letters much easier to collect, and giving you the option to skip stages after you fail a couple of times.

The issue here is that some of the most rewarding parts of the game come from learning the ins and outs of the stages and overcoming their challenges, so removing the barriers risks actually making it less fun. Meanwhile the more regular causes of frustration, like instant death from falling into pits, are exactly the same in Funky or original mode.

My other minor gripe is that throwing Funky into the mix of a two-person game is pretty weird. If player one is Funky, you lose the ability to have player two jump on his back and be carried through the harder sections. It just feels more co-operative when player one is DK.

Funky Mode aside the game is essentially identical to the Wii U original, and while it's disappointing that the only new addition doesn't feel as polished as the rest of the experience (and while I still think original mode is the way to go), this is an unassailably brilliant game no matter how you play it.

With beautiful visuals and sound, some of the most imaginative stage concepts you'll ever find in a platforming game and a heap of secrets that are rewarding to find and even more so to conquer, Tropical Freeze is one of the all-time greats, and this is the best version.

Donkey Kong Country: Tropical Freeze is out on May 4 for Nintendo Switch.