It also has its share of enemies: Regulators who have poked holes in the start-up’s pricing and employment practices. Drivers who sued over their tips. Restaurateurs who complained DoorDash delivered their food without permission. Competitors who can’t keep up with its aggressive growth.

Soon, a new group — Wall Street investors — will pick a side. DoorDash said last week that it had confidentially filed to go public, setting itself up as a test for whether highly valued money-losing start-ups can make it onto the stock market at a time when Wall Street is deeply skeptical of such companies and the coronavirus outbreak has caused market turbulence.

The pressure is high for DoorDash, which private investors valued at $12.7 billion last year. The company lost around $450 million in 2019, according to two people with knowledge of the financials who requested anonymity because the information was private. And it is in talks to raise debt that would convert to equity when it goes public, said two people with knowledge of the discussions.

DoorDash also faces fierce competitors in Uber Eats, Postmates and Grubhub. Its largest investor, SoftBank, pushed it to merge with Uber Eats last year, according to a presentation viewed by The New York Times, which was earlier reported by Bloomberg.

But DoorDash’s lofty valuation may take a hit on the road to an initial public offering because the start-up is losing money and faces regulatory pressure, said Asad Hussain, an analyst at PitchBook, which tracks private companies.

“We expect DoorDash to see a significant valuation haircut,” he said.

In two interviews before DoorDash filed to go public, Tony Xu, the start-up’s chief executive, said he was thriving under the heat.

“I don’t find it that rewarding if this is all up and to the right,” said Mr. Xu, 35. “You kind of have to go through moments of belief and disbelief.”

Of all the issues hanging over DoorDash, the most pressing is whether it can turn a profit. On this, Mr. Xu pointed to DoorDash’s past. Until recently, he said, the start-up was so scrappy that it did not serve its employees elaborate snack spreads and he personally delivered meals in a beat-up Honda. DoorDash turned a profit in certain cities. 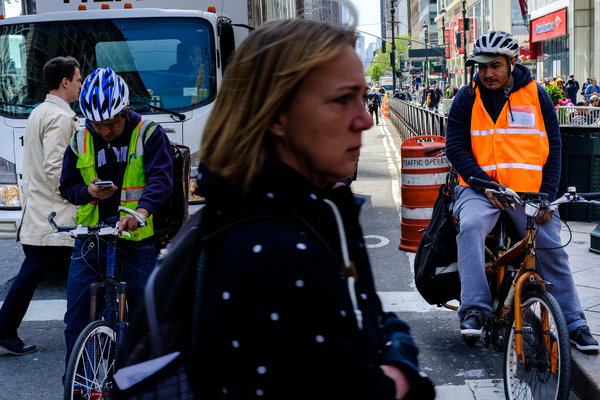 That changed in the past two years, when DoorDash raised $1.9 billion from investors including SoftBank and DST Global. Armed with that funding, the company began spending to grow. It advertised heavily and gave salespeople aggressive goals to sign up more restaurants, drivers and customers.

“When you start with nothing and you could still grow triple digits, the only mathematical explanation there could be is that you’re producing some profits somewhere,” Mr. Xu said.

Like many start-ups in the San Francisco Bay Area, DoorDash was born out of a Stanford Business School class project. In 2013, Mr. Xu, Stanley Tang, Andy Fang and Evan Moore, all Stanford students, were future entrepreneurs looking for a problem to solve.

After discovering that many local merchants did not deliver, they created PaloAltoDelivery.com, a simple site with eight PDF menus and a phone number that rang their cellphones. The founders placed, picked up and delivered orders themselves, pausing the service while they were in class.

“It’s the prototypical entrepreneurship project,” said Mr. Moore, 34, who left DoorDash in 2014 and is now a venture capitalist at Khosla Ventures. “Nobody thought it was a good idea.”

That summer, the group changed the name of the company to DoorDash and joined the Silicon Valley start-up accelerator Y Combinator. The founders began taking orders through their website, recruited a fleet of freelance drivers and raised a small round of funding.

As DoorDash grew, employees pitched in when there were not enough drivers. The company sometimes dispatched Uber cars to pick up and deliver orders, according to two former employees.

To compete with other companies offering takeout, DoorDash expanded its selection of restaurants it delivered from by adding ones that had not signed up to be part of its listings. DoorDash said it had hired international call center workers to call in the orders, and it has told drivers not to tell the restaurants they were with DoorDash. Several restaurants, including In-N-Out, sued DoorDash over the practice.

When it enters a new market, DoorDash adds restaurants that have not signed up for delivery as a way to show restaurant owners the value it can bring, Mr. Xu said.

“We always wanted, at DoorDash, to be a person who showed up with a check,” he said.

Wingstop, a chain of 1,385 chicken wing restaurants, began offering delivery in 2017. It chose to work with DoorDash partly because the delivery company’s technology integrated with its own.

“I had some skepticism as to whether it would work,” said Charlie Morrison, Wingstop’s chief executive. “We experienced strong delivery sales out of the gate.”

Mr. Xu’s peers describe him as competitive and determined. Once a year, he and Mr. Tang, now DoorDash’s chief product officer, race each other in a sprint. When Mr. Xu and his now wife were dating long distance, he bought 12 plane tickets at the beginning of the year to ensure they would see each other once a month.

“Tony is an intense and obsessive person,” said Andrew Munday, DoorDash’s former head of operations. He said Mr. Xu often did the jobs no one else would, like 15 consecutive hours of customer support on New Year’s Day.

Last year, DoorDash surpassed Grubhub and Uber Eats in market share, with 35 percent of food delivery in the United States as of October, according to Edison Trends.

Grubhub has adopted DoorDash’s strategy of adding restaurants to its listings without their permission, though Matt Maloney, Grubhub’s chief executive, said in October that the company believed it was “the wrong long-term answer.”

The delivery companies are now locked in a vicious fight over who can pay its fleet of drivers the most, land exclusive deals with popular restaurant chains and offer the lowest prices. That has led to some consolidation: Last year, DoorDash acquired Caviar, a smaller delivery company focused on upscale restaurants, for $410 million.

Other merger efforts have flopped. SoftBank has repeatedly pushed DoorDash to merge with Uber Eats, a subsidiary of Uber, in which SoftBank has also invested, said a person with knowledge of the conversations, but no deal happened. DoorDash and Grubhub have also discussed acquiring Postmates, which has separately filed to go public, but the companies disagreed on price, said people with knowledge of the discussions.

SoftBank and Postmates declined to comment. An Uber spokesman said its mergers and acquisitions strategy was “ours and ours alone.”

Combining with competitors to become more profitable is “not that insightful of an observation,” Mr. Xu said, adding that he is focused on DoorDash’s growth strategy.

When the company reveals its financials, the potential for profit and growth will be clear, DoorDash investors said. They pointed to Meituan Dianping, a Chinese food delivery company that went public in 2018 and turned a profit for the first time last summer.

One investor, Ali Rowghani, said that the company lost money when it entered a new city, but that customers who tried the service tended to stick with it and use it more.

“As the market matures, they start making money,” he said.

Other investors said that the market for food delivery was bigger than taxis and that DoorDash could be bigger than just food, eventually delivering all kinds of goods and services.

For now, DoorDash is focused on making the food part work. The company is experimenting with autonomous vehicle deliveries, a partnership with Chase to offer free deliveries to credit card customers and a red-brick commissary in Redwood City, Calif., that houses kitchens for multiple restaurants, including Chick-fil-A. Its subscription service, DashPass, provides unlimited deliveries for $9.99 a month and has 1.5 million customers.

Even so, DoorDash is battling legal and regulatory issues — from a new California law that may force it to classify its drivers as employees to a class-action lawsuit over its tipping and another one over a data breach.

Ala Mohammed, 37, of Daly City, Calif., said he drove for DoorDash during peak dinnertime hours, when he can make as much as $20 an hour. Off hours, the pay is lower, so he also drives for Grubhub, Lyft, Caviar, Deliv and Instacart. Mr. Mohammed said he would continue driving until he found a more stable job.

Mr. Xu said the challenges were par for the course. As DoorDash grows, he said, “there’s going to be more tension.”