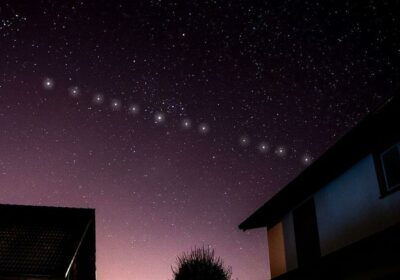 Elon Musk has grabbed the headlines for claiming UFOs and aliens exist—but for thousands of people around the world who have witnessed Musk's Starlink satellites soaring across the night sky, he might as well be referring to himself.

In a nutshell, Starlink is an ambitious attempt to build a global network of satellites capable of providing high-speed Internet to everyone, everywhere on the planet. Currently, there are more than 1,600 of the satellites in low-Earth orbit.

The immediate advantages of Starlink are clear: offering Internet connectivity to even the most remote parts of the world could be life-changing for the 50% of people that don't have it. Starlink's 90,000 subscribers and 500,000-strong waiting list seem to agree.

But with the service leaving its 'beta' test phase next month and SpaceX planning to put a further 40,000 spacecraft in the sky, scientists and astronomers are beginning to worry about the potentially devastating consequences it could have for life on Earth.

Part of the reason Starlink can provide such fast Internet speeds is that its 'constellation' is much closer to Earth than typical satellites: they orbit at a range of around 200 to 400 miles from sea level, whereas typical satellites orbit from as far away as 2000 miles.

This means Starlink satellites are bright—really bright. They reflect sunlight so brightly, in fact, that they look like stars or planets soaring through the night sky. Although SpaceX has tried to reduce the brightness of the satellites by using a super-dark material called DarkSat, they're still clearly visible due to their proximity to Earth. This can heavily interfere with the sort of telescopes that scientists rely on.

As a result, Starlink has sparked major backlash from astronomers around the world, who rely on clear, dark skies to search for new stars, planets, and critically, huge asteroids that could be heading for Earth.

A group of international astronomers have called for legal action to halt the roll-out until the risks can be fully assessed. "The harm here is damage to our cultural heritage, the night sky, and monetary damages due to the loss of radio and other types of astronomy," the astronomers said in a 2020 open letter.

Another major risk is that of collisions. If Starlink satellites hit into one another and break apart, it could create thousands of pieces of space debris floating in Earth's orbit.

Without a way of removing it, that debris could then disable other satellites and cause them to crash into even more satellites, leading to what is called 'Kessler syndrome'—in which space becomes too dangerous for anyone to access. This was memorably portrayed in Pixar's 'Wall-E' when Earth is surrounded by space junk.

SpaceX claims to have designed a solution for this, namely, an AI-powered anti-collision feature on the satellites that moves them away from potential impacts. However, many of SpaceX's satellites are already disabled and have not been returned to Earth.

The risks don't begin and end with Musk's company, either. A whole range of other companies—including Amazon—are clawing to get their own satellite networks in orbit, which could lead to hundreds of thousands of satellites penning us in. Humanity may soon have to decide whether 'Internet for all' is worth space for none.