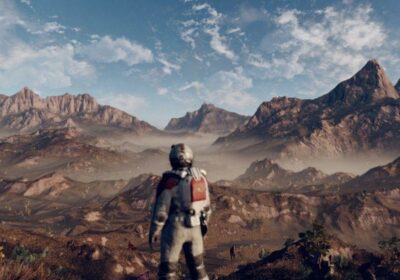 From the Elder Scrolls to Fallout, Bethesda is well-known for its hugely popular RPGs which are praised for their longevity and rich, detailed worlds.

While fans of Skyrim or Fallout 4 are very familiar with the lore and legacy of those game series, Bethesda's forthcoming sci-fi RPG has remained largely mysterious.

Ever since Starfield's release was delayed to early 2023, the hyper has been building around this impressive-looking blockbuster game.

Luckily, thanks to the Xbox Bethesda showcase over the weekend, fans have finally been treated to some major details and critically, gameplay footage from Starfield.

Here's everything we know so far, from the game's plotline to the platforms it will be playable on.

What is Starfield about?

The Xbox Bethesda showcase finally treated fans to details about the game's story after months of secrecy.

Described as 'Skyrim in space' by creator Todd Howard, Starfield is an open-world RPG set across 20 light years. Set 300 years in the future, it sees players take up the mantle of a fully customisable character that joins Constellation, a group of the last remaining space explorers.

The game is set following the events of the Colony War, a bloody conflict that took places 20 years ago between the United Colonies and the Freestar Collective who currently have an "uneasy peace".

However, developers have focused on its gameplay in interviews. Ashley Cheng, production manager at Bethesda Game Studios, told the Washington Post: “For me, Starfield is the Han Solo simulator. Get in a ship, explore the galaxy, do fun stuff."

Will Starfield be multiplayer?

Sadly, Bethesda has repeatedly stated that Starfield will be solo experience and not feature any multiplayer, PvP, or co-op.

It also seemingly won't have any of the 'massively single-player' features that games like Death Stranding do, where the single-player game world is semi-populated by other players who you can't interact with.

However, Starfield will allow you to combine forces with the Constellation, who are teams of space explorers dotted around the game's massive virtual galaxy. You'll be able to fight alongside these NPCs against space pirates and battle it out as a unit, similar to the 'companions' system in Skyrim.

Bethesda has also said that Starfield will have modding support, meaning fans of the game may just make their own multiplayer mods as well.

Will Starfield be on Xbox One or Playstation?

As a Microsoft exclusive, Starfield won't be available on Playstation. What's more, as a next-gen title, it will only work on the Xbox Series X | S line of consoles and high-end PCs.

If you're running the game on PC, you'll need the following minimum system requirements:

However, to run the game comfortably, the recommended requirements are: