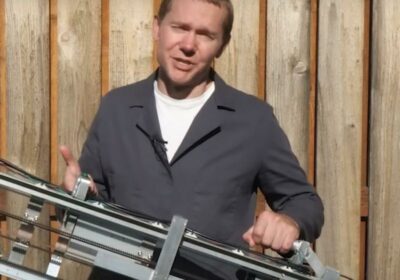 The gun looks like something straight out of Terminator and can fire up to 10 ultra-sharp knives in quick succession.

It uses a small computer system and a reloading belt to perfectly aim the knives, ensuring they enter their target by the pointy-end first.

READ NEXT: Facebook AI will let you 'read minds' and turn thoughts into words and sentences

The YouTube inventors, who go by 'Quint Sr' and 'Quint Jr' on their channel Quint BUILDS, explained that creating the gun was a long, difficult process which required them to study the physics of knife-throwing in detail.

That's because throwing a knife that spins and lands on its tip at different differences and angles is hard enough with a human arm, let alone a machine.

Quint Sr said: "In theory, it's simple. Match the knifes rotation to the distance so the tip hits the target, but in practice it's hard. There are so many other ways that the knife can hit the board.

"As soon as you get some success, changing the distance of it is like starting over. Cutting-edge technology should do this easily if we can keep it from destroying itself."

Once the weapon was complete, Quint Sr showed off its terrifying capabilities. The knives all land in the wood with astonishing accuracy, and thanks to the infrared sensors, even works at night time.

It of course comes with a safety warning on the side which says: "DO NOT TOUCH: THIS WILL KILL YOU AND HURT THE ENTIRE TIME YOU ARE DYING"

Calling it an 'incredible education experience for our kids', Quint Sr said the machine was going to help him and his son perform further tests on the physics of knife-throwing in future videos.