Fortnite 10.30 patch notes update have been revealed. Take a look: Fortnite server downtime is over – stay tuned for more details on the new patch notes momentarily. For now, read on to take a look at all the major changes in Fortnite today!

We’re testing a new feature that gives you the power to vote for what comes back to a new Item Shop slot: Community Choice! When this feature is available, Item Shop content will battle against one another, and you can place your vote on what returns for an encore.

How Does It Work?
For each Community Choice event, you can vote once a day in support of the item you want to see return. While your daily vote is locked once you confirm a choice, you can vote for other items on any following days for the duration of the event. Be sure to log-in each day to get a new vote and show your support!

At the end of the Community Choice countdown, all player votes will be tallied up and the winner will be available in the Item Shop for a limited time. The first Community Choice begins when the shop rolls over in v10.30. Drop in on September 11 at 8 PM ET to cast your first vote!

Moisty Palms –
In this swampy new Rift Zone, you can crouch to disguise yourself as a prop!

Greasy Grove –
A Rift Zone has brought back Greasy Grove, but the neighborhood’s favorite food is now tacos. The tacos here are so good that even their smell makes people party! 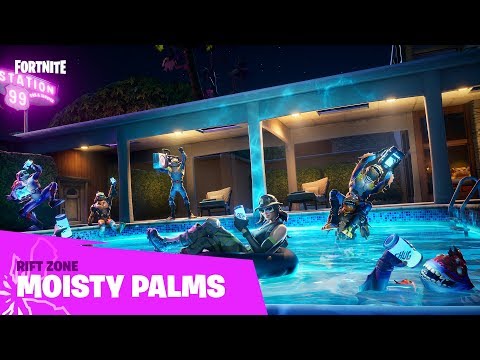 • Created by AlanShinohara. Knock Town was a top 3 contender for the LTM Creator Contest!

• Use the grappler to jump around and dodge shots as you one-tap enemies in the air with the Flint-Knock Pistol. The player with the most eliminations at the end of the match wins!

• Players impulsed by a Shockwave Grenade will no longer destroy a nearby trap without first destroying the building piece it is attached to.

• Resolved an issue in which the Zapper Trap would not build properly when thrown on slopes or uneven terrain.

• B.R.U.T.E.s will now be launched away if they touch the Floating Island’s Cube.

• Previously, they would deal either double or triple damage to other vehicles.

• The color of the B.R.U.T.E.’s cooldown meter now updates properly to correspond with the cooldown value.

• The Rift Beacon at Paradise Palms has created this new POI! In addition to its swampy nature, this Rift Zone is known for being a good place to keep a low profile.

• While in the Rift Zone, crouching will disguise players as a random prop. They can exit the prop state by using the Primary Fire button.

• Players are still able to take damage while in prop form.

• ADS lets players lock in place and look around for unsuspecting victims.

• A Rift Zone has brought back Greasy Grove! But this time, Durrr Burger is out, and Tacos are in!

• Periodically, Spicy Tacos will rain down from the sky. Their smell is so overwhelmingly appetizing that players in the Zone can’t help but dance!

• While dancing, players are invulnerable to damage from others and will regenerate health at 20 HP per second.

• Dancing does not block Storm Damage or regenerate Health in the Storm.

• Spicy Tacos can be consumed for 10 Effective Health (sum of a player’s Health + Shield) and a temporary increase in movement speed (40% increase for 20 seconds).

• The Spicy Tacos don’t last long — grab them before they expire!

• Players will get to vote on what’s featured in the Item Shop!

• The first community vote starts this week. For more information about Community Choice, check out our blog post.

• Resolved an issue in which players were able to damage each other on the Playground Hub.

• When players’ characters are near a wall, they will lower their weapon while in their idle pose.

• This is to reduce instances in which the hands of players’ characters appear through walls.

• Changed the lace color of the Jets 2019 – 2020 NFL Outfit from white to green to accurately match the real uniforms.

• The Flowerprint wrap no longer appears incorrectly on assault and sniper rifles.

• Damaging a tree no longer places a rock texture on its leaves or causes its wood texture to become transparent.

• Lowered the volume of the open and close sounds of teammates’ Gliders by 50%.

• Resolved an issue in which the Battle Bus’ audio would be silent for a short period of time.

• Sending feedback during a replay no longer causes players to get stuck in the Player Reporting or Feedback menu.

• Eliminating another player using a Junk Rift Triceratops will now indicate that they were sent to the Cretaceous period in the elimination feed.

• Previously, the elimination feed would say that they were sent to the Jurassic period, but Triceratops only existed during the Cretaceous period. We apologize for this Tyrannosaurus Wreck of an oversight.

• Resolved an issue in which mouse controls would not function properly in some replays.

• Going near ammo no longer causes the “Can’t hold more of this item!” message to appear when this action is shown in replays.