Shifting to Norse mythology, instituting a peerless cinematic presentation and retaining its gold standard hack-and-slash gameplay, the new God of War does two things I never would have thought possible: it brings the series back to cultural relevance, and it finally makes Kratos a likeable character.

Once notable for his frequent manly bellowing, gratuitous violence, awkward button-mashing debauchery and overall cartoonish masculinity, the former Greek god is now living a humble life in the woods of Midgar and wants nothing more than to forget about his former life. But when Kratos finds himself left to care for his young son Atreus, and is threatened by a messenger of King Odin (who does not look kindly on potential rivals in his realm), he is motivated to leave the protected woods, come out of retirement and make his once sickly son into a warrior. 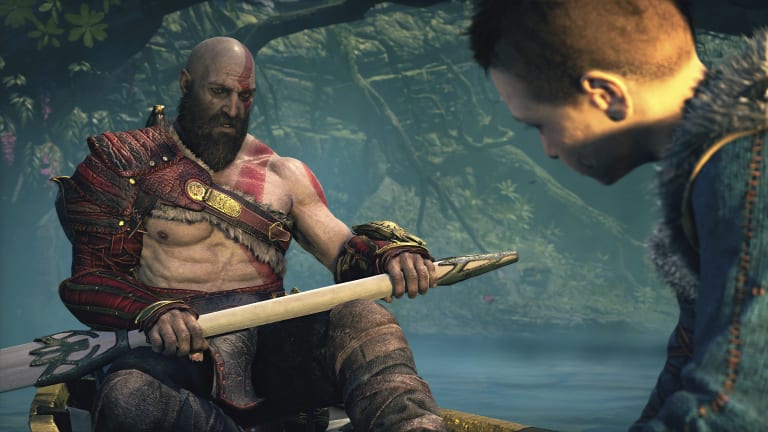 Kratos and Atreus spend a lot of time in the boat.

What follows is a beautiful, exciting and genuinely heartfelt adventure that, rather than sweeping the main character's problematic attitudes and nature under the rug, exposes them. This is not just a brilliant roadtrip through Norse myth, but a great feat of game storytelling too. And, of course, you get to kill a Valhalla-load of demons with a sweet axe.

The aging, bearded Kratos is slower but just as deadly as ever, with a frosty Mjölnir-inspired axe replacing his godly chains. The ability to throw and recall the weapon is not only incredibly cool (if you leave it far enough away you'll hear it clanging and banging as it zooms magically back to you), but it adds an interesting layer to the familiar combat, deadly traps and light puzzle-solving fans will expect.

By combining axe attacks and throws, a new shield mechanic, bare-fisted strikes and support from Atreus and his bow, the fighting becomes a satisfying mix of aggressive offence and enemy pattern recognition. Different enemies, from shuffling undead draugrs to screen-filling behemoths, require different strategies, whether you're going for direct damage or trying to fill a stun meter that allows you to pull of a devastating and often cringe-inducing final blow.

When they're not slaying magical hordes, and even sometimes when they are, there's a brilliant dynamic between the cynical, pragmatic Kratos and the wide-eyed Atreus. The former is a terrifying father figure, and listening to him teach his son to "close off his heart" to the suffering of others is absolutely chilling, but his earnest attempts to create a survivor out of his son make him, for the first time, a sympathetic figure. 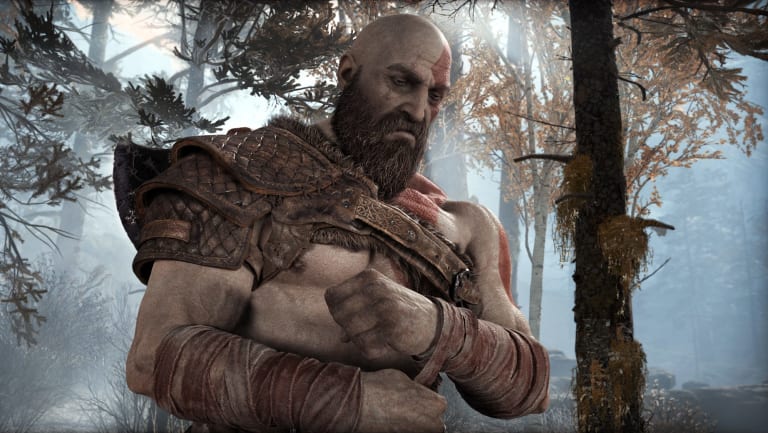 Kratos may be old, but he’s still very difficult to kill.

Pairing him with the child — still naturally capable of love, trust and empathy, and filled with curiosity for the wider world he's seeing with his own eyes for the first time — is a masterstroke as far as allowing the player to understand the psychology of what made Kratos the kind of man he is, and the change in both characters as a result of the relationship is fascinating.

The performances, too, are top notch. Kratos' humourless impatience and raw indifference to the plight of anyone other than himself is hilarious, with Atreus serving as the curious, emotive foil.

What's most impressive is the natural, context-sensitive way the dialogue fits into the game, blending seamlessly with the player's actions rather than stopping the action to give exposition. In one scene, Kratos and Atreus banter while rowing a boat, and each give reasons why they think a particular side mission — which is a completely optional resource-gathering task the player could opt out of entirely — is a sensible use of their time. In another, a dwarven merchant cringes at the sight of blood on Kratos' axe when you ask him to upgrade it. Then, after you've left and are fighting creatures nearby, he's heard to shout: "Hey, I just cleaned that!"

Characters aside, the nine realms as depicted here are among the most interesting seen in a video game or film. Whether you're wandering an enchanted forest or infiltrating a hive of cockroach-like dark elves, every area has a distinct look and feel along with its own collection of secrets and side-quests to discover. Kratos is still a stranger to this world, but Atreus has grown up learning about it. And so while father teaches son the ways of war, Atreus carries his weight by translating runes and filling in backstory. 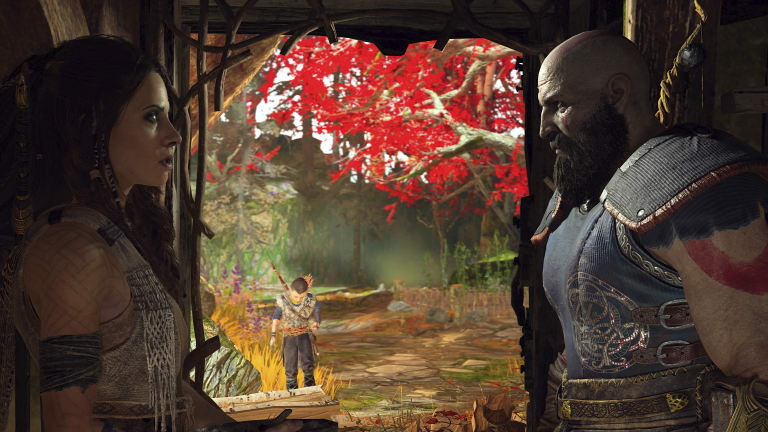 A memorable cast of supporting characters help the pair on their way.

From well-known characters like Thor and the World Serpent to deeper aspects of Norse culture and totally original details, Atreus keeps notes on everything you see in a book you can peruse at any time. Following the direct path through the story will take you on a world tour through the realms, but some of the most interesting stuff is off the beaten path, and it's really worth taking your time to see it.

And that's true in a gameplay sense as well as in terms of lore, as your ability to unlock and upgrade your armour and abilities is closely tied to the kind of loot you can find. Some upgrades are necessary to access certain areas and come baked in as part of the progression — à la Zelda or Metroid — but finding clothes and enchantments with the right properties to suit your style can make a huge difference. Even outside of combat you might find, for example, doors locked with runes that Atreus can only read once you've tracked down the requisite ciphers.

In terms of presentation, this is far and away the most impressive game of 2018 so far, from the grounded character models and varied colour palettes of the different realms and locations to the sweeping orchestral score.

The camera has moved to a locked position over Kratos' shoulder for a cinematic look, and the entire game progresses in a single, fluid cut. Notwithstanding the times you die or stop playing, there are no time jumps or loading screens, and it's incredibly effective at keeping you engaged. With the story, combat and exploration all tied closely together and influencing one another constantly, the whole thing just feels like such a polished, cohesive adventure.

As someone who was never a fan of Kratos and his puerile antics in the past, I can't believe how much I love the new God of War. Like Tomb Raider before it, the series has managed to keep something of its heritage while grounding its previously inaccessible main character and filling the whole experience with depth and feeling.

And while there are a lot of comparisons to draw between the two revived series — especially the similarly structured and excellent Rise of the Tomb Raider — God of War has done it without wiping the narrative slate clean, and that's to its great credit.

God of War is out now for PlayStation 4.