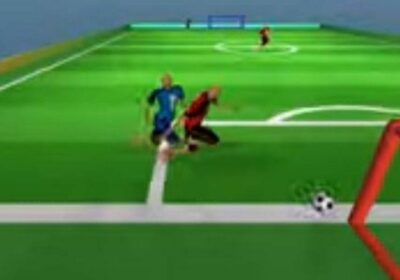 AI is one step closer to beating Ronaldo at the beautiful game, thanks to new breakthrough research by Google DeepMind.

DeepMind, which is one of the tech giant's artificial intelligence divisions, trained virtual bots to play matches of 2v2 football with one another in a bid to get AI to work together in teams.

It brings us one step closer to a terrifying future where artificial intelligence systems are capable of 'general' intelligence, where they can adapt to different situations easily.

In a blog post, DeepMind explained that its AI was able to acquire some of the skills used by real footballers, including passing, agility, and working together.

They were even able to jostle other (virtual) players, tackle opponents, and play 'through balls' to their teammates.

DeepMind also ran other simulations on teaching humanoid AIs to throw and catch a ball, among other tasks.

It's all part of a wider project to teach AI general sets of skills so it can adapt to new situations, rather than only being good at one task or objective.

DeepMind's project isn't the first time robots have played football. Scientists last year predicted that within 30 years a team of robots could win the World Cup against humans, with robots already competing in leagues such as the RoboCup.

The RoboCup founders' aim is to create a 'team of fully autonomous humanoid robot soccer players' that will win in a match 'complying with the official rules of FIFA' against the 'winner of the most recent World Cup' by the middle of the Century.

Peter Stone, RoboCup president and computer science professor at the University of Texas in the US, said: "It's certainly plausible."