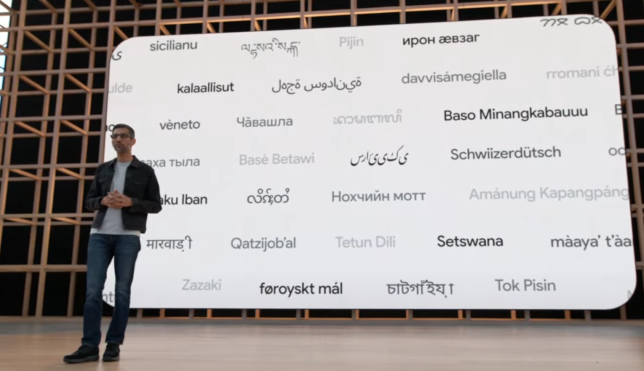 Google has been caught up in an embarrassing gaffe unveiling one of its own products.

In yesterday’s keynote presentation at Google I/O, CEO Sundar Pichai presented the addition of 24 languages to its Google Translate service.

But the slide behind him had translated several of the languages incorrectly.

On the slide Pichai was presenting, the text in Arabic reads ‘Sudanese Language’ written backward – as unlike European languages, Arabic is written from right to left.

TechCrunch said the right answer would have been لهجة سودانية — which means ‘Sudanese dialect’ or ‘Sudanese slang’ — seemingly what the company was trying to communicate.

The script made Arabic speakers raise an eyebrow, while another Twitter user pointed out an error with the Swiss German spelling — usually written as ‘Schweizerdeutsch’ — too.

Google also appears to have translated several other languages in non-Latin script incorrectly.

A Twitter user pointed out the Urdu translation made little sense, breaking it down in a thread.

Congrats to @Google for getting Arabic script backwards & disconnected during @sundarpichai’s presentation on *Google Translate*, because small independent startups like Google can’t afford to hire anyone with a 4 year olds’ elementary school level knowledge of Arabic writing. pic.twitter.com/pSEvHTFORv

I made a helpful annotation for everyone. Every single one that’s not Latin- or Cyrillic-based is wrong (at least a little bit).

I struggled a bit with displaying the Bengali script, but I made it work better than did this “Google” startup, whatever that is https://t.co/0nCKiOsJLh pic.twitter.com/R9mlxeuMvx

Viewers were quick to highlight the mistakes on social media, frustrated the tech giant did not proof read the slide before the big event.

But if any of these words are put into Google Translate right now, the product gives the correct answer.

A senior Google executive who worked on the event apologised for the mistake, saying they wouldn’t offer excuses.

‘We feel a big sense of responsibility to make sure everyone is accurately and authentically represented,’ they said.

‘I’m sorry we didn’t hit the mark – we’ve corrected the video and are updating our processes.’

But we can apparently be rest assured that Google Translate now supports a total of 133 languages around the world.

You can re-watch Google’s faux pas moment on YouTube.