Home » Technology » Google Nest Audio review: If only it looked as good as it sounds

Google Nest Audio review: If only it looked as good as it sounds 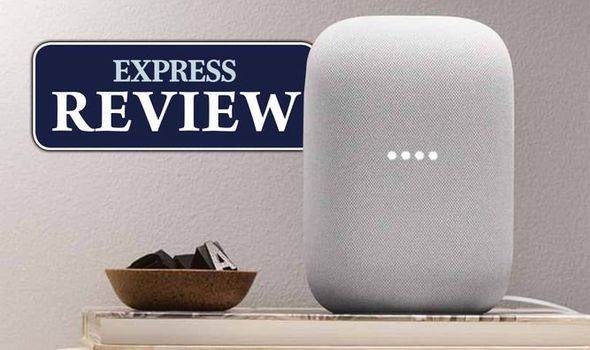 Four years after it was first launched, the Google Home smart speaker has finally been updated with a new look, improved sound, and a brand-new name. Now known as the Nest Audio, this boxy speaker certainly sounds good on paper, but is a worthy successor to the much-loved Google Home? Express.co.uk has been putting the Nest Audio through its paces and here’s our full review.

Straight out of the box, Google has made setting up this new smart speaker easy-peasy. Simply plug it in, launch the Google Home app on your Apple or Android device, then follow the on-screen instructions – it really is as simple as that.

We had our Nest Audio up and running in under two minutes. Once you’re set-up, the first thing you’ll notice is how much better this thing sounds than its predecessor. By tweaking the design and completely ditching the famous (or infamous, depending on your mileage) air freshener-style look, Google has been able to pack two extra speakers under the fabric finish.

This means you not only get audio which is now 50 percent louder, but the built-in tweeter and woofer help bring some much-needed bass to Google’s smart speaker range too. Until now, anyone looking for some serious audio clout from the Google line-up would have to opt for the pricier Google Home Max, but the Nest Audio should save you the upgrade.

Google says it completed more than 500 hours of tuning to ensure balanced lows, mids and highs and all of that work has certainly paid off. 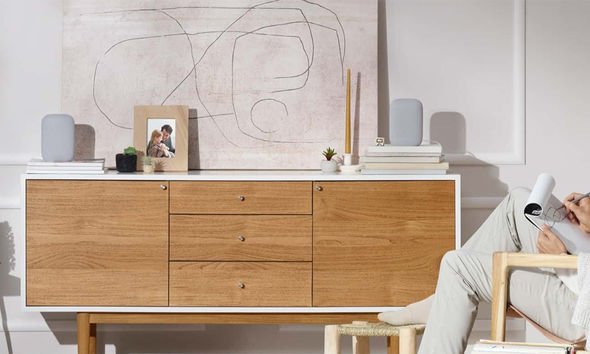 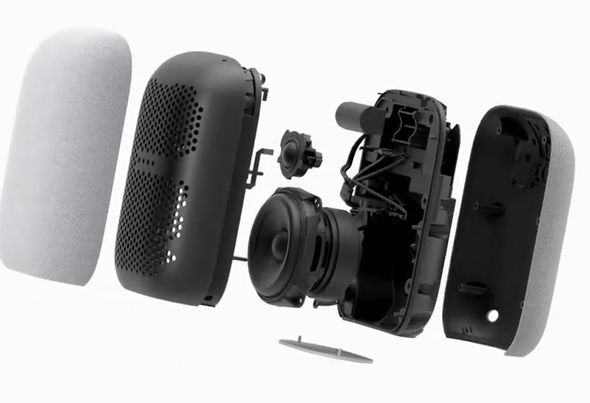 There’s no question that the sound that booms from the Nest Audio is head and shoulders above the previous Google Home. For an even better experience, you can put two of them together and pair them up for stereo sound. That all sounds great, but this improved experience has come at a price. As we mentioned earlier, to fit all of this extra equipment inside the Nest Audio Google has been forced radically change the design and we’re not entirely sold on it.

In the UK, you can only buy the Nest Audio in the rather bland Chalk and Charcoal colour options, which aren’t exactly inspiring.

Other countries, including the US, get the choice of Sage, Sand and Sky colourways, which certainly help to make it look more exciting. Google is thought to be bringing more colours to the UK soon but, for now, we’re left with just a couple of pretty boring options. 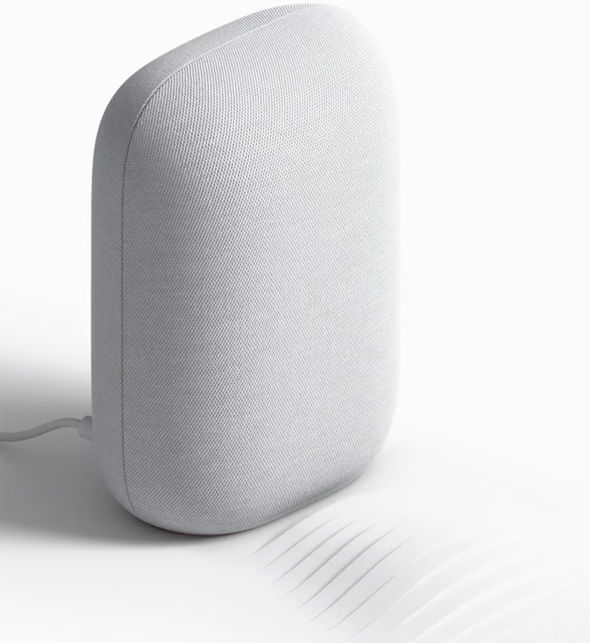 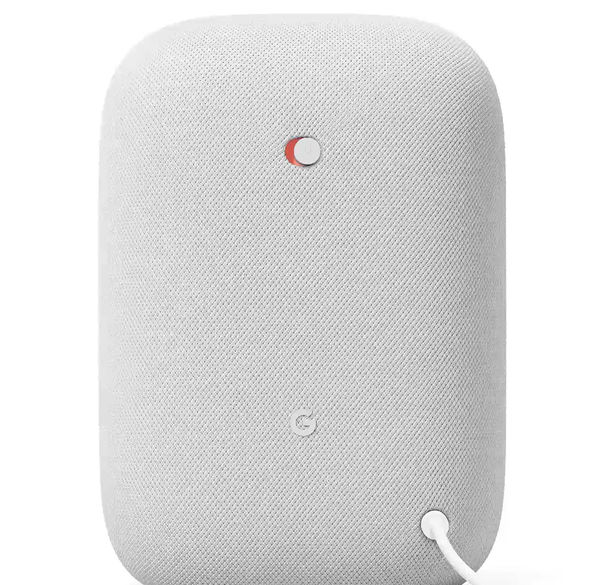 Now, don’t get us wrong, there’s nothing really wrong with the way the Nest Audio looks – it’s just that it doesn’t really stand out in this ever-growing market. Amazon and Apple have both announced new smart speakers within the last few weeks, which both sport an interesting ball-shaped appearance. These look set to really stand-out …especially when stood beside the Nest Audio.

Another thing we don’t like about the Nest Audio is you can’t see the volume controls. This means you’re left to blindly tap on the top of the device in the hope of turning up or down the volume. Google employs a similar technique with the Nest Mini, which doesn’t have clear + or – buttons to control volume. It wasn’t massively intuitive then, and things haven’t changed in the time since that product launched.

There are three lights that glow in the middle of the speaker to show the current volume level, but these don’t help you find the actual buttons, which are located on a completely different part of the speaker. 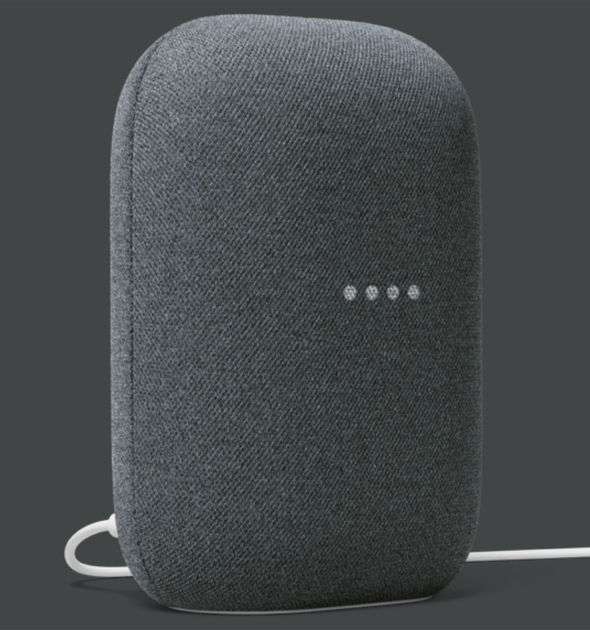 For our money, the bland pillow-like design, dull colours and somewhat confusing volume controls have left us reminiscing about the original Google Home design, which looked distinct from its competitors and shipped in a dizzying array of colours to match your home décor.

Fortunately, one area where Google’s all-new Nest Audio doesn’t fall short is its smart features. This device includes access to the Google Assistant, which means you can ask it pretty much anything and get a decent response. From checking on the progress of your takeaway, to finding out the latest temperatures and headlines, controlling smart tech around the home, and pausing shows playing on your Chromecast – Google Assistant is spookily clever.

The Nest Audio also links up to devices from the likes of Philips Hue, TP-Link, and more so you can control the heating or lightning simply by asking. Plus, if you’re a YouTube Music or Spotify Premium subscriber, you can say, “Hey Google, recommend some music” and Google will offer a variety of choices from artists and genres that you like.

Sadly, there’s no option to use voice commands for Apple Music subscribers. If you have the Android app, you can Cast your favourite album or playlist with a tap …but getting your phone out every time you want to change song is pretty poor compared with what YouTube Music and Spotify subscribers can do. 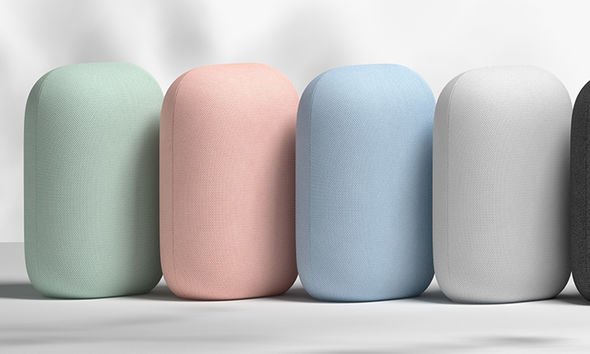 Well, there’s no question that Google has built a great-sounding speaker. Your favourite playlists will boom from this voice-controlled smart speaker with enough power and volume to fill any room in your house. On top of that, the fact you can pair two together makes the Nest Audio an even more appealing choice for audiophiles.

With the impressively smart Google Assistant tucked inside you’ll also be able to get sensible answers to every question you ask the Nest Audio, as well as being able to control your heating and lights with a few words.

In fact, our only real gripe with the new Nest Audio is the way it looks.

While it’s true that there’s nothing terrible about the design, well, it’s just not that inspiring, is it? Given that these smart speakers are supposed to be placed around the home – in every room to take advantage of some of the features, let’s not forget – the design really matters.

If Google decides to bring some of its brighter and funkier colours to the UK, we might change our mind but, right now, there are better devices to look at every single day. All in all, this is a serious audio upgrade from Google, but it’s a shame that it doesn’t look anywhere near as good as it sounds.