Hands on with iPhone 11 Pro Max, Apple Watch Series 5 and the new iPad Though Apple's annual product reveal event on Wednesday was titled “By Innovation Only”, there was no “one more thing…” on offer at the Steve Jobs Theatre. But there were incremental improvements for the new Watch, three iPhones and entry level iPad on display, as well as announcements around Apple Arcade and Apple TV+.

Not everything was available to try on the day, but I was able to play around a little with the iPhone 11 Pro and 11 Pro Max. The new camera lenses are a little raised, but don’t bulk out the phone as much as it looked in the flatter photos. The width of the phone doesn’t feel different to last year's XS Max. 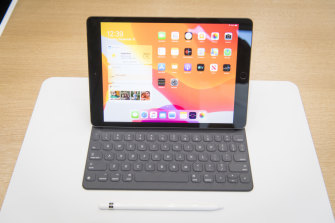 It was on the iPad that I got to properly check out the Arcade tab of the App Store. It’s just like browsing the regular App Store, except that subscribers will be able to get anything for free, which is certainly my preferred kind of store. Of course that subscription itself will cost you $7.99 per month.

Playing the new Frogger In Toy Town certainly made me a little nostalgic for Crossy Road, but the graphics were extremely good for a Frogger and the game was fun. It’s one I look forward to playing when Arcade is available on the September 20.

The author travelled to California as a guest of Apple.