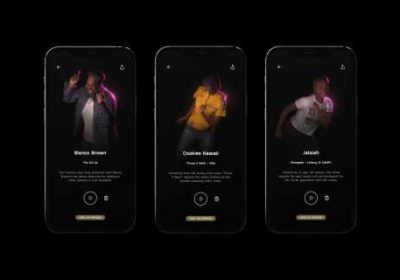 Holograms of three viral TikTok dancers were auctioned off over the weekend — the first sale of its kind — in an effort to compensate and recognize the Black creators behind them on Juneteenth, according to a company with Colorado ties.

The creators included TikTok stars Jalaiah Harmon, famous for her Renegade dance that racked up more than 5 billion views on the social media app; Cookiee Kawaii, whose song “Vibe (If I Back it Up)” amassed billions of views and spawned the “Throw it back” dance; and Blanco Brown, whose country song “The Git Up” was seen more than 2 billion times on TikTok and sparked line dancing galore.

The holograms — created by the company Jadu, which focuses on augmented reality experiences via mobile phones — were made in tandem with the TikTok stars, who were brought into a room surrounded by hundreds of cameras to capture their dances from every conceivable angle, said Isaiah Chavous, former University of Colorado Boulder student body president and current Jadu employee.

“Black culture has been exploited in all areas, especially when it comes to dance and music,” said Chavous, one of two employees at Jadu with Colorado ties. “Now we can compensate the originators of these phenomena by immortalizing them in the physical world through digital means.”

When using the Jadu app, the holograms of these creators and other celebrities appear on screen, making it look like Harmon, Kawaii or Brown is standing next to whoever the user is filming and allowing anyone to dance alongside their favorite viral stars.

In many cases, these dances that had been replicated by celebrities as famous as the Kardashians were taking off without properly crediting the artists, Chavous said.

“The songs and dances all started to blow up, but nobody knew the original creators,” Chavous said.

Campaigns were mounted to rectify this oversight, with Harmon even getting a write-up in the New York Times.

However, Chavous said Jadu wanted to do more.

Jadu launched an auction to sell the dancing holograms as NFTs — non-fungible tokens — on Juneteenth, to honor the Black creators.

An NFT, Chavous explained, is a collectible digital asset that can be purchased with cryptocurrency. Buyers can purchase anything digital — arttik-tok, videos, music — as an NFT, which can act as a certificate of authenticity to verify ownership, Chavous said.

Think of it like a digital art collection. And collectors are spending millions to acquire NFTs

The Jadu sale was the first hologram NFT purchase, and the proceeds went to the creators, Chavous said.

“This was not a money-making scheme,” Chavous said. “This was to shine light on creative work that hasn’t gotten the due credit it deserves.”

When converted from cryptocurrency to U.S. dollars — a rate of exchange that fluctuates daily — each hologram ended up selling for a few thousand dollars, with Harmon’s selling for the most at about $8,000.

But just because the holograms now have an owner doesn’t mean they’re not free to be played with on the Jadu app, Chavous said.

“Some of the norms that will come out of this are going to be very telling as to the next five, 10 years of how the casual average consumer experiences their digital world, and building out this metaverse that is going to exist in the near future is going to be dependent on some of these norms set right now,” Chavous said. “We intend to be one of those norm-setters and setting the playing field equal for all the players.”