How the Biden Administration Can Help Solve Our Reality Crisis 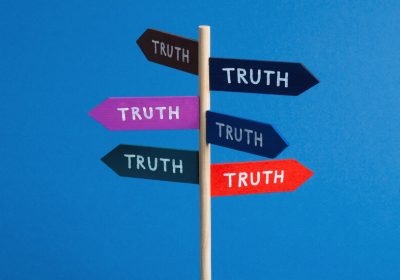 Last month, millions of Americans watched as President Biden took the oath of office and, in a high-minded Inaugural Address, called for a new era of American unity.

But plenty of other Americans weren’t paying attention to Mr. Biden’s speech. They were too busy watching YouTube videos alleging that the inauguration was a prerecorded hoax that had been filmed on a Hollywood soundstage.

Or they were melting down in QAnon group chats, trying to figure out why former President Donald J. Trump wasn’t interrupting Mr. Biden’s speech to declare martial law and announce the mass arrest of satanic pedophiles.

Or maybe their TVs were tuned to OAN, where an anchor was floating the baseless theory that Mr. Biden “wasn’t actually elected by the people.”

Hoaxes, lies and collective delusions aren’t new, but the extent to which millions of Americans have embraced them may be. Thirty percent of Republicans have a favorable view of QAnon, according to a recent YouGov poll. According to other polls, more than 70 percent of Republicans believe Mr. Trump legitimately won the election, and 40 percent of Americans — including plenty of Democrats — believe the baseless theory that Covid-19 was manufactured in a Chinese lab.

The muddled, chaotic information ecosystem that produces these misguided beliefs doesn’t just jeopardize some lofty ideal of national unity. It actively exacerbates our biggest national problems, and creates more work for those trying to solve them. And it raises an important question for the Biden administration: How do you unite a country in which millions of people have chosen to create their own version of reality?

In the past year alone, we have seen conspiracy theorists cause Covid-19 vaccine delays, sabotage a wildfire response and engineer a false election fraud narrative. We have also seen that if left unchecked, networked conspiracy theories and online disinformation campaigns can lead to offline violence, as they did during last month’s deadly Capitol riot.

I’ve spent the past several years reporting on our national reality crisis, and I worry that unless the Biden administration treats conspiracy theories and disinformation as the urgent threats they are, our parallel universes will only drift further apart, and the potential for violent unrest and civic dysfunction will only grow.

So I called a number of experts and asked what the Biden administration could do to help fix our truth-challenged information ecosystem, or at least prevent it from getting worse. Here’s what they told me.

Assess the damage, and avoid the ‘terrorist’ trap.

The experts agreed that before the Biden administration can tackle disinformation and extremism, it needs to understand the scope of the problem.

“It’s really important that we have a holistic understanding of what the spectrum of violent extremism looks like in the United States, and then allocate resources accordingly,” said William Braniff, a counterterrorism expert and professor at the University of Maryland.

Joan Donovan, the research director of Harvard University’s Shorenstein Center on Media, Politics and Public Policy, suggested that the Biden administration could set up a “truth commission,” similar to the 9/11 Commission, to investigate the planning and execution of the Capitol siege on Jan. 6. This effort, she said, would ideally be led by people with deep knowledge of the many “networked factions” that coordinated and carried out the riot, including white supremacist groups and far-right militias.

“There must be accountability for these actions,” Dr. Donovan said. “My fear is that we will get distracted as a society and focus too much on giving voice to the fringe groups that came out in droves for Trump.”

These experts were heartened that the Biden administration had already announced a “comprehensive threat assessment” of domestic extremism after the Capitol riots. But they cautioned that categorizing these extremists as “domestic terrorists” — while understandable, given the damage they’ve caused — could backfire. They noted that counterterrorism efforts had historically been used to justify expanding state power in ways that end up harming religious and ethnic minorities, and that today’s domestic extremism crisis didn’t map neatly onto older, more conventional types of terror threats.

Instead, they suggested using new and narrower labels that could help distinguish between different types of movements, and different levels of influence within those movements. A paranoid retiree who spends all day reading QAnon forums isn’t the same as an armed militia leader, and we should delineate one from the other.

Several experts I spoke with recommended that the Biden administration put together a cross-agency task force to tackle disinformation and domestic extremism, which would be led by something like a “reality czar.”

It sounds a little dystopian, I’ll grant. But let’s hear them out.

Right now, these experts said, the federal government’s response to disinformation and domestic extremism is haphazard and spread across multiple agencies, and there’s a lot of unnecessary overlap.

Often, she said, the same people and groups are responsible for spreading both types. So instead of two parallel processes — one at the Centers for Disease Control and Prevention, aimed at tamping down Covid-related conspiracy theories, and another at the Federal Election Commission, trying to correct voting misinformation — a centralized task force could coordinate a single, strategic response.

“If each of them are doing it distinctly and independently, you run the risk of missing connections, both in terms of the content and in terms of the tactics that are used to execute on the campaigns,” Ms. DiResta said.

This task force could also meet regularly with tech platforms, and push for structural changes that could help those companies tackle their own extremism and misinformation problems. (For example, it could formulate “safe harbor” exemptions that would allow platforms to share data about QAnon and other conspiracy theory communities with researchers and government agencies without running afoul of privacy laws.) And it could become the tip of the spear for the federal government’s response to the reality crisis.

Several experts recommended that the Biden administration push for much more transparency into the inner workings of the black-box algorithms that Twitter, Facebook, YouTube and other major platforms use to rank feeds, recommend content and usher users into private groups, many of which have been responsible for amplifying conspiracy theories and extremist views.

“We must open the hood on social media so that civil rights lawyers and real watchdog organizations can investigate human rights abuses enabled or amplified by technology,” Dr. Donovan said.

One bill introduced last year by two House Democrats, Representatives Anna G. Eshoo of California and Tom Malinowski of New Jersey, could help contain some of the damage. The Protecting Americans From Dangerous Algorithms Act would amend Section 230 of the Communications Decency Act to remove large tech platforms’ legal immunity for violent or violence-inciting content that their feed-ranking and recommendation systems amplified, while preserving their immunity for other user-generated content.

But you might not even need legislation to get these companies to open up. Last year, under the threat of a forced breakup, TikTok pledged to allow experts to examine its algorithm to prove it wasn’t maliciously manipulating American users. Given their current antitrust issues, other social networks might respond to a similar nudge in the direction of transparency.

The experts I spoke with warned that tech platforms alone couldn’t bring back the millions of already radicalized Americans, nor is teaching media literacy a silver bullet to prevent dangerous ideas from taking hold.

After all, many people are drawn to extremist groups like the Proud Boys and conspiracy theories like QAnon not because they’re convinced by the facts, but because the beliefs give them a sense of community or purpose, or fills a void in their lives.

One effective countermeasure, Mr. Clark suggested, could be a kind of “social stimulus” — a series of federal programs to encourage people to get off their screens and into community-based activities that could keep them engaged and occupied.

Encouraging offline gatherings would, admittedly, be easier after the pandemic. But there are interventions that seem to work on a smaller scale, too — like a series of “de-escalation” ads that Moonshot CVE ran on Twitter and Facebook, targeting high-risk potential violent extremists with empathetic messages about mental health and mindfulness.

Most of the experts agreed that the most effective thing the Biden administration could do to fix our national reality crisis, and possibly even de-radicalize some of those who have been lured into extremist groups and conspiracy theory movements, would be to address the underlying problems that drove them there in the first place.

“A lot of the barriers to re-entry are very pragmatic and boring,” said Mr. Braniff of the University of Maryland. “They’re not necessarily about changing someone’s ideas. They’re about giving them access to different circumstances that allows them to disengage.”

Christian Picciolini, a former skinhead who now runs the Free Radicals Project, an organization aimed at pulling extremists out of hate groups, agreed. He said it was impossible to separate people’s material conditions from their choice to sign up for an extremist group or follow a deranged conspiracy theory like QAnon.

“We have to treat this like we would any other social service,” Mr. Picciolini said. “We have to destroy the institutional systemic racism that creates this environment. We have to provide jobs. We have to have access to mental health care and education.”

In other words, if President Biden wants to bring extremists and conspiracy theorists back to reality, he can start by making that reality worth coming back to.