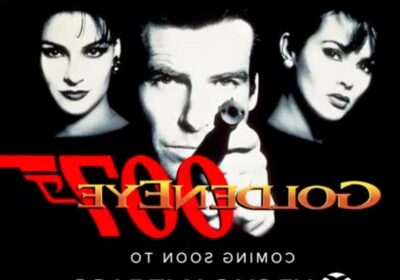 One of the most popular Nintendo 64 games of all time is finally getting ported to the Switch and Microsoft Xbox: GoldenEye 007.

This classic first-person shooter will soon be released on Xbox Game Pass and Nintendo Switch Online, giving modern players the chance to try out a truly iconic FPS.

First released in 1997 to tie in with the James Bond movie of the same name, GoldenEye 007 will be re-released with upgraded controls and HD resolution, and even include fans' favourite cheat codes.

READ NEXT: Queen Elizabeth 'showed all the signs of becoming a Nintendo addict' and loved Wii Sports

For many millennial gamers, GoldenEye was their first ever shooter and was a mainstay of countless hours of 'couch coop' with friends.

Now younger generations of gamers will have the chance to experience its timeless gameplay⁠—and aging graphics⁠—along with the split-screen multiplayer.

Gamers young and old have shared their excitement at the release, which will also include online play.

One gamer, Gavin Stevens said: "It's always strange seeing the generational gap. To me, GoldenEye 64 multi was the s**t. It was just what we cool kids did, when we wasn't playing Quake, Unreal, C&C and stuff. It was the best FPS MP you could get on a console, and at the time the ease of it was just unmatched."

GoldenEye was announced for Switch as part of a raft of new N64 emulator games which are included in the Nintendo Online+ expansion pack.

This allows Switch players to enjoy some of Nintendo's classic retro games, from SNES to N64.

Other titles announced alongside GoldenEye include Pokemon Stadium 1 and 2, Excitebike 64, and Mario Party 3.

All of this was revealed as part of Nintendo's September 2022 'Direct' event where the Japanese gaming giant also shared a new trailer for the new Legend of Zelda: Tears of the Kingdom game.