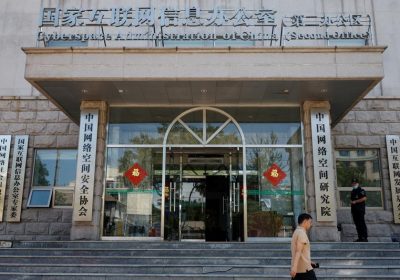 FILE PHOTO: A man walks past an office of the Cyberspace Administration of China (CAC) in Beijing, China July 8, 2021. REUTERS/Thomas Peter/File Photo

SHANGHAI (Reuters) – China’s southern Guangdong province said it plans to build a common data platform for the Greater Bay Area that includes Hong Kong and Macau, and will build a data trading market in Shenzhen – part of efforts to regulate data more thoroughly.

Guangdong will also explore the establishment of a data “customs hub” to review and supervise data that crosses borders, the provincial government said on a notice on its website dated Sunday.

The government will “promote the circulation and sharing of data between Guangdong, Hong Kong and Macau and the use of data to benefit industrial development, social governance and services for the people,” the statement said.

Authorities will also strengthen oversight of data transactions and speed up the introduction of legislation for the digital economy, the Guangdong statement said.

It was not immediately clear what types of data would be traded in Shenzhen.

Data regulation, particularly cybersecurity relating to Chinese companies listing or listed in the United States, has become a major focus for Chinese authorities this month with a raft of new measures and initiatives announced.

That began with the Cybersecurity Administration of China’s sudden announcement of a probe into ride-hailing giant Didi Global Inc just days after its listing in New York and the subsequent order for its app to be removed from app stores.

On Saturday it said that any company with data of more than 1 million users must undergo a security review before listing its shares overseas.